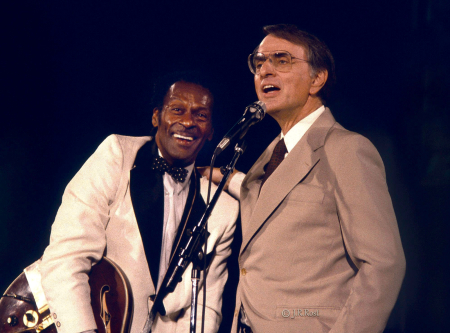 Until he died a week ago Saturday, the last time I’d thought about Chuck Berry had been a few weeks before that. I'd thought, as I usually do, about his lyrics as my emblem for information efficiency — for conveying a lot with very little.

I was re-watching an episode of Carl Sagan’s 1980 show, Cosmos — specifically episode XII, “The Persistence of Memory.” In it, Carl has a dandelion hidden in his hand and plays a game of 20 Questions:

With 20 skillfully chosen questions we could easily whittle all the cosmos down to a dandelion. In our explorations of the cosmos the first step is to ask the right questions. Then, not with 20 questions, but with billions, we slowly distill from the complexity of the universe its underlying order. This game has a serious purpose. Its name is science.

I remembered what Chuck Berry wrote:

Deep down in Louisiana close to New Orleans, way back up in the woods among the evergreens, there stood a log cabin made of earth and wood where lived a country boy named Johnny B. Goode, who never ever learned to read or write so well, but he could play the guitar just he’s like a ringing a bell.

In the first few lines of “Johnny B. Goode,” mostly without realizing it, we learn that Louisiana even has a Piney Woods at all, a bit about log cabin construction, the main character’s name and aspirations and his degree of literacy, and we're told how to hear his guitar style in our imaginations (to prime us for hearing it in our ears immediately after).

While he's at it, Berry situates you, the listener, on the song’s fictional map. Whether you’re actually listening to the song in Calabria or Tasmania, at McMurdo Station, or in the French Quarter, you are now somewhere from which Louisiana is “way down.”

Sagan’s “Persistence of Memory” episode ends with “Johnny B. Goode” becoming part of the music anthology on the 1977 Voyager Record, which so transfixed me as a kid. At some point during a more recent fixation, I realized Harry Smith’s earlier 1952 Anthology of American Folk Music had come to me later, out of sequence, like a prequel.

Reviewing the evidence — especially Sagan’s astonishing book, Murmurs of Earth — I see no reason to think the Voyager Record's design team was familiar with Smith’s Anthology. (Otherwise, they surely would’ve included “Moonshiner’s Dance.” I mean, it would've taught the aliens to count to four in English, right?). They consulted Alan Lomax of the Library of Congress, but seemingly not Moe Asch of Folkways.

Blind Willie Johnson — I first heard his collected works as an astronomy student in Tucson in 1984 — appears on both the Smith Anthology and the Voyager Record, but there’s an even more surprising connection between the two anthologies. Appearing on the Voyager Record is a field recording made in Peru by John Cohen.

Cohen’s band, the New Lost City Ramblers, had Harry Smith’s sensibilities all over it — Smith's twisted humor, his expressionist evocations, his taste for anything soulful but arcane, his ambivalent self-image as something that could be called a new, lost, city rambler.

If you found your first banjo or autoharp in the back of your parents’ or grandparents’ closet, they might never have heard Smith’s Anthology, but they almost definitely knew about The Ramblers. The band disseminated Smith’s attitudes about America’s musical identity more broadly than Smith himself did, by orders of magnitude.

After Smith’s vast personal collection of 78's was acquired by the NYC Public Library, Cohen’s bandmate Mike Seeger and the Anthology’s key booster, Ralph Rinzler, spirited out the non-circulating disks, taped them, and then secretly returned them to the library. This cache became a key source for The Ramblers' repertoire — their mother lode, as Rinzler called it.

Later, in 1969, Cohen interviewed Smith for Sing Out!, and the interview seems to have been the folk revivalist community’s first widespread introduction to the kind of mind they had followed over the cliff.

So, along with Willie Johnson’s, Cohen’s cut on the Voyager Record smuggled a bit of Smith’s spirit aboard that NASA rocket in 1977.

If an extraterrestrial civilization ever retrieves the Voyager spacecraft, the artifact of the vehicle itself would yield beautiful information about planet Earth and about the state of human technology as of the 1970s. To that civilization, the Voyager Record — with its technical textbook, ambient sound essay, spoken greetings, photos, and music anthology — would be a bonus, like the prize that used to come in a Cracker Jack box.

For them, the music portion would be easy to play back but challenging to comprehend and likely to initiate deep debates across hundreds of generations.

In that music, I’m sure they’d recognize strings being stretched and vibrated, and gas being made to resonate in tubes. They’d know it was some kind of communication, possibly more for us than for them, maybe communication we valued and thought was somehow good for us, maybe something we were proud of.

But I can’t see that they could ever grasp any those details in “Johnny B. Goode” — the fledgeling string-vibrator vying for wide-spread awareness within in his civilization. No matter how advanced the ET’s technology or philosophy, the contexts and meanings of the recording would be unrecoverable.

I argued in my recent “Amnesia Theater” essay that meaning without context and content takes on a special intensity. Maybe the lostness of 20th century Earth would lend a powerful aura to the recordings — music from outer space, music from a gone world, music from entirely other spheres of creation heard resonating in the celestial monochord. I bet they'd think those sounds were some of the best music in the entire universe.