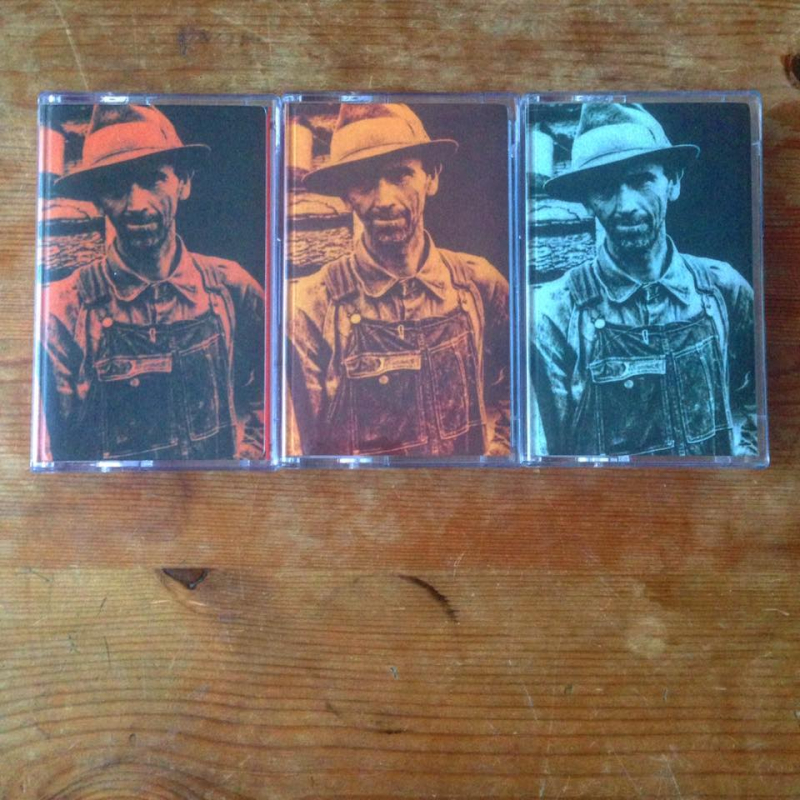 My last vehicle was a green & tan 1993 Dodge Dakota extended-cab pickup with a cassette player and somewhat blown-out speakers. I used that cassette player every day for years, generally without irony.

But you should’ve heard Tom Waits’ “Jesus Gonna Be Here” — the bassline was just a toneless rumble, and all you could really hear clearly was that monotonous slide guitar. It was beautiful.

That was a long time ago. Today, I’m not sure I still own a working cassette player.

But just last week, a label in the UK calling themselves Death Is Not The End (hereafter, DINTE) reissued the Anthology of American Folk Music on cassette tape. Of course, I’m tempted to pony up. It’s pretty affordable — £21 for the 3-volume set before transatlantic shipping.

But then, I don’t have anything appropriate to play them on. And if I had the equipment, I’d probably only use it to dub over to ones & zeros my tapes of some clawhammer banjo lessons from a decade ago.

Besides, I own two copies of Smithsonian-Folkways’ 1997 reissue of the Anthology on CD (since one set of CDs is apparently one too few). Plus, I’ve already bought more than a few other copies of that 1997 CD set as gifts for friends and for people who’ve been helpful in my research on “Moonshiner’s Dance.”

The 1997 CD set was the format in which I first met the Anthology.

I had stumbled across Greil Marcus’s book Invisible Republic at the Har Mar Barnes & Noble in late 1997. I read it voraciously, not quite realizing that the book was only a few weeks old. It convinced me to go buy the Anthology, so I hurried over to the Electric Fetus in south Minneapolis. There, I held the boxed set in my hands for the first time, again not fully appreciating that this had only been possible for a few weeks.

Because it was new, the Electric Fetus had it on sale. And I had an Electric Fetus coupon. And everything at the Fetus was 10% off that day. I remember asking a dude behind the desk which of these discounts would be applied. To my great surprise, they would all be applied. Still, it would be over $50, so I walked around the Fetus for an hour with the boxed set tucked under my arm before I screwed up my courage to pull out my wallet.

Looking back, I see they should’ve given me that first set *and* electrified my fetus for free. Folkways should’ve sprung my lizard for nothing. When I think of those fifty bucks now, after the countless tens of thousands in opportunity costs and hard currency I’ve blown thanks to buying that very first copy … damn! Still, of course, I’d do it all again in a heartbeat.

I didn’t bother getting the LP reissue Mississippi Records put out a couple years ago. I didn’t want to discourage Smithsonian-Folkways itself from doing a proper job of it instead. Besides, from what I can assume judging mostly from the total silence on the subject from Mississippi Records, their LPs were just burned off the Smithsonian CDs that I already own.

Some vinyl partisans claim that old LPs sound better than typical CDs because down-sampling the music for CD deletes information contained in the original analog recording. Could be — but you sure as hell don’t get that information back by burning a CD back onto vinyl. I have no problem with the Mississippi Records release, but buyer beware if you think you’re buying vinyl sound integrity and not just an accessory for your handlebar mustache … not that there’s anything wrong with that.

Now *that* would be something. Not only have various technologies been advancing since the mid 1990s, every 78 RPM disc — not every title, every physical disc — is a unique object. You know this if you’ve ever played the same recording from two ostensibly identical copies of a 78, one after the other. You don’t just hear more or less, you hear different things in the two copies. They have lived alternate lives between 1920-something and the day they arrive together again on your turntable. Quality is qualitative, not quantitative (that’s quantity).

More recently, I ponied up a Clydesdale for a pristine, very early copy of the Folkways LP boxed set. I don’t know but I’ve been told it’s from 1952, the very year Folkways first released the Anthology. That original release was practically made by the hands of Harry Smith, Moe Asch, and Peter Bartok by spinning on the turntable 78s in Harry’s personal collection and dubbing them onto the master.

Then, 45 years later, Smithsonian-Folkways used a lot of that 1952 master to make the 1997 CD reissue. But for some cuts, they swapped in cleaner, newly-located 78s. They also did some noise reduction and fussed with speed/pitch.

That’s why having a copy of the 1952 LP opens up the possibility of observing the handiwork of the 1997 reissue team. What exactly did they do to 1952 to get the 1997 results? I’ll write about that here when I think I’ve got something to say. For now, DINTE’s cassette reissue seems likely to have been recorded off the 1997 CDs and seems unlikely to provide that sort of new insight.

What really interests me about DINTE’s cassette reissue is that it nearly unbreaks the circle of the Anthology’s historic formats. With a cassette tape being made available, the job of format revival is almost done.

The Anthology first appeared as a collection of LPs. Those eventually went out of print, but the Anthology never did. No Folkways recordings have ever been out of print — even when the company couldn't afford to press new vinyl of a title, Moe Asch kept it in print by any means necessary. The Smithsonian agreed to the same policy as a condition of acquiring Folkways.

For many years, the only way Folkways could sell the Anthology was as cassette tapes made on demand. I wish I’d known enough to order it during that period — I’d like to see what those tapes looked like. Did they have cover art? Were they typed? Mimeographed? Handwritten? Did you get Smith’s booklet?

Already in the early 1960’s, Smith’s original cover art (featuring the celestial monochord) had been replaced with Ben Shahn’s Farm Security Administration photograph of a farmer — it took the 1997 CD set to restore the long-abandoned celestial monochord cover art. So, given the specific cover art that was current at the time Folkways started fulfilling orders with on-demand cassette tapes, DINTE’s choice of Ben Shahn’s photo makes serious sense. That level of thinking stuff through is a good sign.

In any case, those days of on-demand cassette tapes were the dark ages that the 1997 CD reissue was designed to end.

If you want new LPs of the Anthology, I think you can still find the Mississippi Records reissue. And of course, the CD boxed set is still available from the Smithsonian-Folkways website. And suddenly, that in-between era of on-demand tape is now also covered, thanks to DINTE’s cassette reissue.

The only period in the Anthology's history not currently available as a reissue is its prehistory.

There was a time before Smith and Asch had even dreamed of creating such a collection. In that pre-Anthology period, all those 78s were just unrelated, scattered old records, even if today they look like scripture lost among dusty discs of apocrypha.

I’ve got to assume somebody is out there working to reissue the collection of 78 RPM records that Smith assembled to make the Anthology. I imagine each reissued disc would have to include its original B side, a subject often discussed by Anthology devotees.

I’d hope anyone considering such project would do it up right by starting from scratch and not simply burning to vinyl 20-year-old CDs from Document or the Smithsonian. And they could also consider comping some bloggers, or at least answering their questions.

I talked to Eric, the owner of Mississippi, and he told me that this version is a new mastering from original 78's and was not sourced from the Folkways masters. The new masters were sourced primarily from a single collector who had most of the source 78 recordings that were used in the original Folkways pressings. They did a certain amount of sonic cleanup, but not obsessively as to preserve as much fidelity as possible.

[From the hoffman forums]
http://forums.stevehoffman.tv/threads/200g-lp-reissues-of-the-harry-smith-anthology-of-american-folk-music.335523/page-2

You should be able to very clearly *hear* that these are new spins of different 78s - or even of the exact same copies but 60+ years older. Why didn't they advertise the fact (if it's so) that they made new transfers, since that means something to anyone who knows anything. Why the big secret?

A friend of mine owns the Mississippi Records set and has offered to sit me down and let me listen. Maybe we'll put the three together - the 1952, 1997, and 2014 boxes - and dream up something to say about the experience.

I have the vinyl Doxy music label version from 2009. Any idea what their source material was?

Hey Mikkel - Oh yeah! I forgot all about that Doxy version! From Italy, if I remember right? It had different cover art all its own - something from Fludd or his era, and in four different colors for each volume.

With Doxy, Mississippi, and DINTE ... if you snoop around various discussion lists, you see people debating, passing on hints, whispers, claims under this table, into that sleeve, thru speakeasy slots in closed doors. It must be a label-culture thing.

Charging people for A Product In A Box without describing publicly in detail what's in that box, where it came from ... nope. In those cases, I'm content assuming it's just burned off another release, which is an entirely familiar practice.

Incidentally, at the time Mississippi Records was first offering its LP set I did contact them to ask about where the audio came from, but was rebuffed - they completely ignored my inquiry.

very bland but you did get the original booklet folded up inside (the Anthology would have been three boxes). I have dozens of these (this isn't my picture, though).

Many sincere thanks, Chris - that's definitely interesting and very much what I'd expect. I understand the real thing would be SO CLOSE to this.

Still, those are already Smithsonian-Folkways. They'd be the tapes you'd get during the period between the Smithsonian's acquisition of Folkways (1987, I think) and their release of the CD set (1997). I was thinking of the form of the Anthology itself you'd get in, say ... 1983? Between the last pressings of the Anthology vinyl (I don't know ... 1975?) and 1987.

Whose were the dark ages. The lean, uncertain years. The heroic, I'm gonna keep this old boat afloat until the water reaches my lower lip years. That's what I'd really like to see. And the Harry Smith liner notes are a strange beast quite unlike other Folkways notes, so those specifically would be interesting to see.

Obviously, I know it seems like a trivial distinction, but once you're already in the mindset of looking for the absolutely genuine article of an obsolescent obscurity, well ... that's where you are.