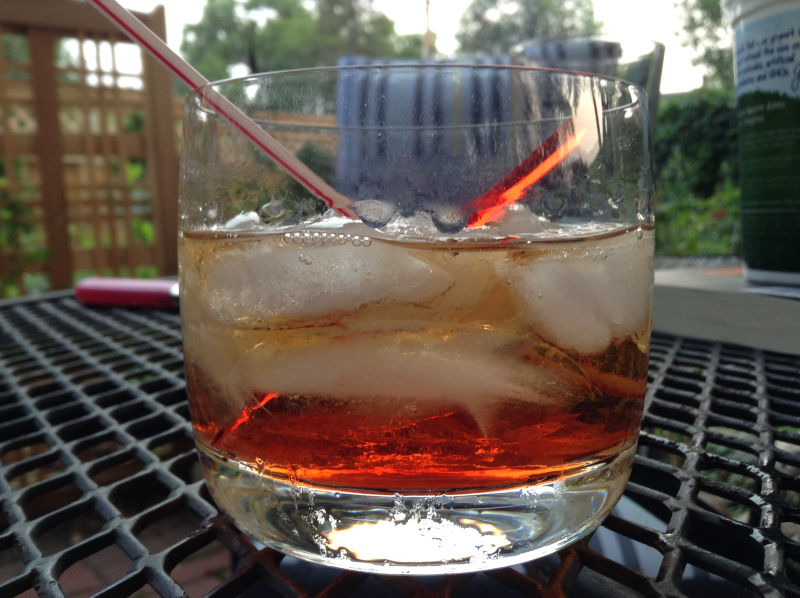 My parents were both born in 1925, so their earliest memories formed during Prohibition.

Mom’s father had a moonshine still in a room of their rural Wisconsin farmhouse, behind a door she was not allowed to open. Now 91, she can still smell the still’s awful stench and she associates it with the more traumatizing parts of what was sometimes a very difficult childhood.

When I tell people that anecdote, I find they often have a hard time adjusting to the possibility that moonshine stills also existed outside of North and South Carolina. Yes, in the USA, Prohibition happened everywhere.

And it failed everywhere. I can almost guarantee that if you’re reading this within the United States and your digs were built before 1934, Noble Experiment moonshine was consumed between the walls of the room you’re in right now.

I’ve had Michael A. Lerner’s 2007 book, Dry Manhattan: Prohibition in New York City, on my shelf for almost a decade during which I’ve been pursuing, often with great intensity, a Prohibition-lated research project.

My procrastination in reading it was due to its geographic narrowness. Still, now that I’ve read it, I realize I hadn’t quite anticipated the book's New York provincialism. It's not just about NYC — it’s from a strictly NYC POV. Sometimes, it can barely see Hoboken from where it sits.

But point of view is a valuable tool for a writer (and even researcher). Dry Manhattan might be the best book I’ve read about Prohibition (I like it better than Okrent's excellent Last Call) and I was foolish not to read it immediately in 2007. It’s provided me with a lot of research leads and context for my own findings. It also has me thinking fresh thoughts about my own work, what its own provincialisms are, and what the hidden value of them might be.

Lerner repeatedly argues for NYC’s importance to any understanding of Prohibition — i.e., that the premise of the book is valid. He does it often enough that he seems unsure we’ll buy the premise. (Not a bad instinct, it turns out.)

It’s easy to believe that New York helped set the cultural terms on which the rest of the country experienced Prohibition — at least in large cities. In defying the 18th Amendment, urbanites everywhere felt a specifically newyorkish sophistication. My own research on St. Paul’s “Moonshiner’s Dance” has produced many clear illustrations (a long essay to be published in the next six months or so will touch on this).

Lerner also argues for New York as perhaps the most important political turf for drys and wets alike. Just recall that Al Smith (who changed the national conversation) and FDR (who signed the national legislation) were both New York governors during their presidential bids.

His most transformative insight in that vein is that the drys failed to transform the USA because they could only conceive of it as a 19th century fantasy. New York City — with its energy, complexity, diversity, adaptability — was a better model for the real 20th century United States than anything the temperance folks could comprehend.

Relentlessly, Lerner drops “in the city” or “in New York” into sentences that would’ve been about as true had they been said of any other American city (or, perish the thought, of any corner store at a farmland crossroads anywhere in flyover country). New York City, it often seems, is specified to keep the whole premise of the book from seeming moot.

Sometimes, there’s a blinding New Yorker’s vagueness about that big map “out there” in the middle of the country (where, incidentally, everybody is strangely familiar with New York).

After reading the chapter on Al Smith’s campaign, readers should google-up the 1928 presidential election results map. How that map and that chapter could coexist in the same universe is barely conceivable. What really happened in 1928?

And as a Twin Citian, I would also like to remind New Yorkers that the burning crosses greeting Al Smith were in Oklahoma. Even in Volstead’s rural Minnesota, such is scene is again barely conceivable. But that is a story for another book.

For my purposes, what the book does best also highlights the contradictions and missed opportunities of its premise. (Granted, that's a universal characteristic of books, which one learns to exploit as a weapon in grad school).

At times, the book turns sharply to what I think of as good cultural history — resuscitating meanings that have long ago stopped breathing, stripping familiar symbols of the inevitability of their symbolism. My own work on “Moonshiner’s Dance” has increasingly poked around at this.

Dry Manhattan, both because of its successes and its not-so-much bits, has me thinking anew that something like an … experiential or signification history of Prohibition still needs to be written. Maybe it’s been done, and I just haven’t found it yet.

Lerner is vivid about how young women in the 1920s got tired of the presumptuousness of older Progressive-era women who had secured their voting rights and took away their drinking rights. The younger generation felt just fine about pursuing other, and even opposing, agendas.

People — my people, really — knew when they were being scapegoated, and violating the Constitution by drinking booze made them feel part of a new, more plausible, more American way of life. And there were, and are, a lot of us around these parts ... around-about here, locally ... in this area.

My dad was something like an “anchor baby.” His father and mother immigrated separately from Austria and Prussia in 1924, met each other over here (both were German-speaking Catholics, so …), and they had my dad in 1925.

Of the many go-to stories my dad repeated too often, his favorite was about an incident in the early 1950s:

He and Mom and the first of their seven kids were living in Moline, Illinois, in a dense thicket of dry counties. The only way to get a drink was to join some kind of fraternal organization, so Dad joined the Knights of Columbus in Davenport, Iowa, just across the Mississippi River.

One Sunday morning, Dad was drinking in the crowded K of C clubhouse, when the parish priest walked in and told the entire bar that he had a message from the bishop of the Diocese of Davenport himself, the Most Reverend Ralph Hayes.

Henceforth, the K of C clubhouse would be closed on Sunday morning so the men could attend church services instead.

The bar was silent for moment. Then the bartender shouted, “Alright, everyone in favor of closing the bar on Sunday morning, say ‘Aye’!”

My own relationship with booze was shaped by my upbringing, a fact that instantly and directly involves the 18th Amendment to the Constitution of the United States in every hangover I’ve ever had. And I was born during the Johnson administration, just outside Chicago.

Our identities are built in conversation with the built environment — and both persist longer than anyone’s awareness of their having been built at all. We are historic artifacts like those under glass in a history museum, and with memories about as good.

So, especially out here in the historic borderlands of the Upper Midwest, we are vulnerable to, and politely tolerant of, the standard narratives — the regionalist cliches of musical or literary tastes, say, or the full-blast stereo megaphones blaring our culture at us from the east and west coasts.

Good history may do what Dry Manhattan does in defamiliarizing the past, but it should also interrogate the book’s assumption that history starts in the center and radiates outward toward the frontiers over time. Just as often, whether we ourselves know it or not, history starts here.

I have been a big fan of your blog for a long time, so welcome back after a long dry spell. I always find your posts to be both thoughtful and provacative, so I hope that there is a book in the works and not just a lengthy essay since the radio silence has been so long. Keep posting when you have a thought in the meantime. It makes my day.

As a midwessterner and a fan of prohibition era music, I assume that you have the CD "The Banks of the Little Auplane" by Julie Johnson and the No Accounts, but I have never seen mention of it on your blog, despite your lament of the lack of a northern equivalent to Harry Smiths Anthology. Just a heads up on a group that has done their part to fill the gap and to try to keep traditional midwestern music alive.

Anyway, I hope this comment motivates you to keep writing, even if intermittently. Some of us out here are still listening....

Thanks, Tor! I really appreciate the kind words - it means a lot to me.

My plan is indeed to breathe life back into the Monochord, so keep reading and checking in over the coming months. I certainly always have plenty to write about.

A few people keep encouraging me to write a book, and writing things - any things - for the Monochord will surely help just as it's helped me do larger projects in the past (the upcoming essay, for example).

I will definitely will check out Julie Johnson and the No Accounts - they are indeed new to me, and it's great to hear about them. Thanks again!