Llewyn Davis, Inside Out 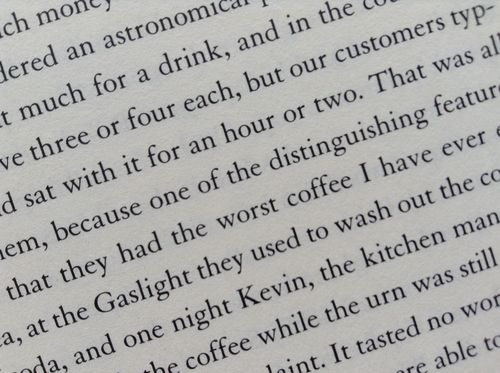 I just read The Mayor of MacDougal Street, a memoir of the Greenwich Village folk scene of 50 years ago, written by the late Dave Van Ronk with engineering by Elijah Wald.

I bought my copy when it was published in 2005, and began the long process of moving it from one stack of books symbolizing my various intellectual ambitions to another. Now that a Coen Brothers movie, Inside Llewyn Davis, has been loosely inspired by it, the book moved to the stack symbolizing "read the book already, Einstein."

To my surprise, I laughed my ass off reading Mayor — my wife was happy I finally read something funny. I want to repeat certain of its stories the rest of my life, but several are chapter-length psychodramas that start funny, and build and build with running gags and all the trimmings.

A story about absinthe smugglers is one of those stories that's almost too good to be told, never mind whether it's true. A chapter about Van Ronk's cross-country trip to California certainly seems smarter and funnier than anything in On the Road … maybe it's me.

And then there's that brief anecdote about a Greenwich Village rat.  Similar stories helped end my fantasies of having been there for the Golden Age. (I can't remember how I know a story about Mike Seeger scrawling "roaches roaches roaches" on the wall in John Cohen's apartment.) But Van Ronk's vermin story is the best yet, maybe owing to his matter-of-fact delivery.

In essence, Mayor is an oral history of the mid-century Folk Revival.

The book shows just how good oral histories can be as literature, and how important they are to reviving the past as lived reality. Robert Shelton's role in booking acts at Gerde's Folk City, and John Mitchell dodging bullets from all directions … those stories reorganized my understanding of that time and place, and they could only have come to me through oral history.

And Van Ronk's memories constitute arguments about the past that some readers will find challenging.

At some point over the past 20 years, I realized that there wasn't one Folk Revival, but instead an ongoing, rolling revival impulse running through American culture, changing shape and location and agenda. New revivalists keep being born, always with fantastic notions in their heads about the past:

They all seemed to go to Music and Art High School, and their parents all seemed to be dentists. I remember once coming across a covey of them sitting cross-legged around a bespectacled banjoist who struck a dramatic chord and earnestly explained "This is a song the workers sing when they're oppressed."

Van Ronk's street-level memories, refined over some very eventful decades, would make a great education on what it was really like, what people were really thinking about, and which romantic ideas you should abandon and which you should hold on to.

Not that Van Ronk couldn't be full of it, or that Elijah Wald's handiwork doesn't occasionally shine through. But the quality is such that these function as layers of complexity a wise reader will appreciate.

Here Van Ronk is the stereotypical New Yorker feeling superior to fly-over country, but there he's marveling at the depth of talent flowing into the Village from Hibbing and Detroit.

Here he insists that song lyrics need to make literal sense on the page ("along" a watchtower?), but there he praises Francois Villon specifically for using slang that no longer means anything.

Here he rolls his eyes at the insipid tourists who associated Greenwich Village with the horror genre (both were weird, he guessed), but there he argues that science fiction was a perfectly natural association (both are weird, I guess).

I know from Lewis Erenberg that theme restaurants like the spooky Cafe Bizarre had been features of Greenwich Village at least as early as 1915. It raises the question of just how important selling "a version of Greenwich Village that never existed" has always been to the existance of Greenwich Village. Much of it was created by landfilling with garbage in the 1700s — its very ground was established by Clydes.

Rigorous peer-review might have cleared and screwed all of this up completely. Visions like Van Ronk's — both observation and misperception — were driving forces behind the Greenwich Village Folk Revival and, for that matter, all historical events, past, present, and future. The fog of war *is* the real war, not a veil that obscures it.

As for my own fog, Dave Van Ronk had been one of those people I'd had a recurring appointment with, and I never managed to keep it. I knew his face, his voice, and his rap sheet, but he always was mostly the guy Dylan stole the "House of the Rising Sun" arrangement from.

Indeed, because I knew he was a key figure in a key time-and-place (maybe the in the), it meant there was no hurry. His story and music would always be around when I was finally ready for them. That attitude is one reason I'm not good at collecting oral histories.

Now, after Mayor, I have what feels like a relationship with the guy, and I get why people's feelings about him are often profound in a full sense of the term.

His music seems urgent to me now, and I see the mark of his music and mind on a lot of people who understood him long ago. For example, his friend Dakota Dave Hull is a friend of mine, and I've always nodded sagely when he talks Van Ronk, which is often. Probably, I'll do less nodding and closer listening in the future, when I get the chance.