on "North Country: The Making of Minnesota" 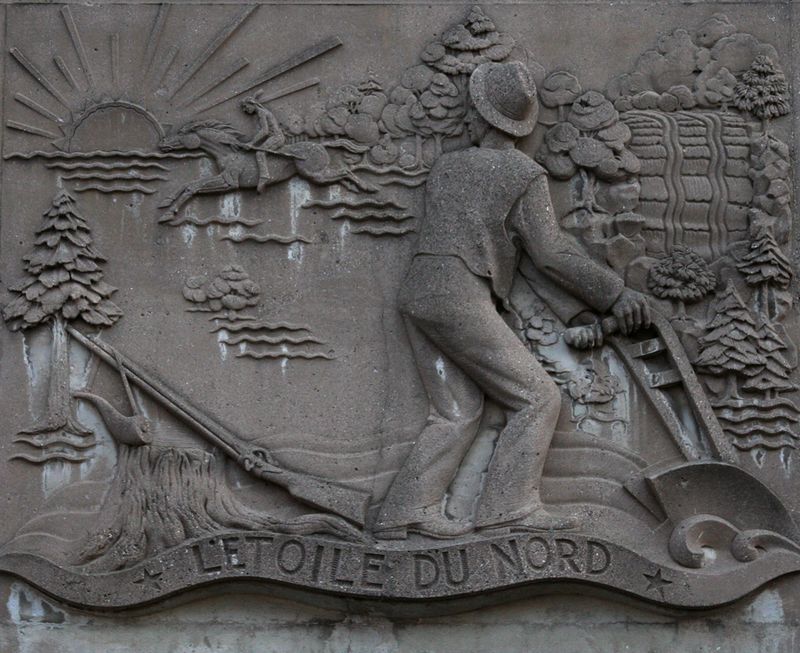 A relief on the MN State Fairgrounds features the same motif used in the official State Seal.

My favorite Chinese take-out place has a map of its delivery area taped to the wall.

I've studied it at least once a week for years, waiting for my order to be up. Because I live just a couple blocks away, it's a map of my Minneapolis neighborhood.

A few weeks ago, I was drawn into the map by the thrill of something truly new.  Suddenly missing its familiarity, the map was layered now with too many horrors and ironies and personalities to trace.

It now covers about half the area Major Plympton cordoned off in 1839 for the Fort Snelling Military Reserve. Deciding that an "era of good feeling" was at an end, the Major slapped a ruler across a map of what is now the Twin Cities, and carved out the area he would command.

Previous Fort Snelling commandants had encouraged French Canadians, mixed bloods, and various refugees to make their homes there, where I make mine today.  But in 1839, they suddenly had to vacate onto nearby land recently promised by treaty to the Mdewakantons.

Plympton cited military necessity, but he and his fellow officers and the Fort's physician had all heavily invested in land claims within the boundaries of the new reserve.

Apparently, they failed to anticipate that economic activity would halt as soon as the area was cordoned off, so that the nearest point on the Mississippi River outside their reserve would become St. Paul — the new State Capitol and regional center of trade.

And then, my Hunan shrimp and egg rolls were ready.

I'd postponed reading it for a long time, partly because it's 3 lbs 9 oz — like a Webster's Collegiate Dictionary — and it actually hurt a little to hold and read.  I think those months of handling the thing softened its edges enough for me to finally take it up.

But then, reading it was never in doubt. Wingerd's only previous book was one of the best reading decisions of my life.

Claiming the City: Politics, Faith, and the Power of Place in St. Paul was a history of St. Paul's civic identity.  That is, it traced who the people of St. Paul saw themselves as being and how their identity evolved over time, shaped by economic, ethnic, and religious power.

After Claiming the City, the place I'd lived for 20 years seemed newer to me than the day I first arrived.  And the older the structures, the newer they seemed.

You can't imagine the impact the book had on my Victoria Theater efforts and, especially, on my understanding of "Moonshiner's Dance."

Apparently, I wasn't alone. North Country was commissioned to mark the state's 150th birthday with A Big Serious History of Minnesota.  Such a tome hadn't been written in over 40 years.

Given this grand opportunity to make a lasting mark, Wingerd chose the kind of modest approach that makes for good history.

North Country asks how the State of Minnesota emerged out of the vast woodlands and prairies of the Dakota people.  To find answers, Wingerd focuses intently on the Native American-European encounter.  Minnesota was the product of a series of evolving interactions.

In Wingerd's telling, the particulars of those interactions dissolve any sense of inevitability in their outcome.

For example, the book traces the rise and fall of Minnesota's border cultures, such as the Metis, who occupied a genetic and economic space between Native Americans and the French fur traders.  Such cultures flourished across North America for a little while, but Minnesota's formed very early and persisted very late, evolving into an important force in the state's making.

I was pretty struck by the Metis, who appear at first glance like some sort of forgotten 1700's steampunk enclave, especially in light of Kirsten Delegard's masterfully compiled and annotated illustrations.

Ultimately, the (real) Metis emerge as one of Minnesota's many roads not taken — once-viable alternatives to either the domination of Minnestoa's Native population by Europeans, or the preservation of some timeless prehistoric idyll.

This is a recurring theme of the book — the abandoned options for a Euro-Native encounter that could have benefitted everybody more than it did, including the supposed victors.

The book culminates with Minnesota's war between the Dakotas and US forces, and the state's subsequent genocidal reaction. By then, this lack of inevitability, those roads not taken, are a profound and agonizing subtext. "Cataclysm on the Minnesota" is the chapter title.

I've always been vaguely aware that various place-names in the city of Minneapolis came from Longfellow's romantic poem Hiawatha. They're printed on that map in my Chinese take-out restaurant.

But in North Country's epilogue, the meanings of these place-names, and of the places themselves, telescope enormously.

I'd never quite appreciated that Minneapolis had used "a literary cult that attracted followers from all reaches of the globe" to help construct a new historical identity for the state.

The epilogue — "Pasts Remembered, Pasts Forgotten" — treats memory and amnesia about Minnesota's past as active projects undertaken in the service of specific goals.

I worry about potential readers assuming North Country is a depressing litany of genocidal crimes.  On so many levels, it is another project entirely, likely to enliven your relationship with your immediate environment, as it has mine.

Mostly, I'm grateful for its becoming, maybe inadvertently, the final event in its own story of forgetting and remembering, and of the common good abandoned and reclaimed.