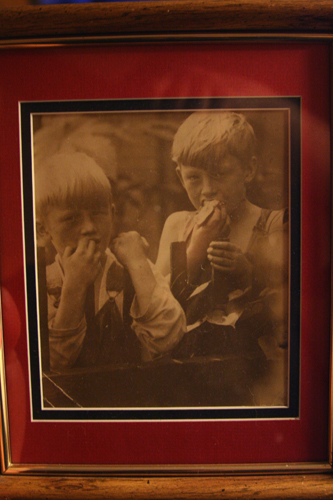 The tracklist for Tempest, Bob Dylan's upcoming album, was released on Tuesday:

In response, the armies of Dylan analysts went on red alert. The Expecting Rain discussion about the (as-yet-unheard) album suffered 500-posts in the first day.  With little to go on but song titles, I'll mostly keep my powder dry for now.

Still ... I have to note the first track, "Duquesne Whistle," because my father was born in Duquesne, Pennsylvania, in 1925, according to his birth certificate.  My next earliest addresses for him are a couple miles up the Monongehela, in Clairton (where The Deer Hunter was set).

For me, the title of the song is great news.  For one thing, it confirms that Bob Dylan is indeed sending me — and not you — subliminal messages through his song lyrics.  What a relief!  I was beginning to think I was just imagining things.

More importantly, Bob has thrown Duquesne to the Dylanologists like meat to ravening wolves.  Over the years, the song will provide an ongoing opportunity to know more about my dad's native town and the history of this particular corner of America.

My father was the first child of immigrant workers, starting a family in a steel mill town full of other immigrant workers. His own father had just arrived two years before from Austria — aboard the SS President Fillmore, believe it or not.

The other families on my dad's particular street had just arrived from Mexico, Turkey, Greece, Italy, Hungary, and Lithuania, according to the 1930 census.  Dad was an anchor baby, if you prefer.

Some time in the late 1930's — that is, in the depths of the Depression — the family moved to Milwaukee, where dad met mom at a bowling alley.  She was a farm girl from just outside Port Washington, where Blind Lemon Jefferson recorded for Paramount.

It was a good move, I think, since the shock of the Depression seems to have been less sharp in Wisconsin.  Mom reports being largely unaware of it on the farm — they weren't rich, but then, they never had been.  Prohibition made a much bigger impact on her, because it brought a still into the house.

Dylan's "Duquesne Whistle" will help illuminate my dad's side of the story.  That seems natural, since music was the main reason I got into family history at all.

I had focused obsessively on "Americana" or "roots music" for 15 years before I tried to do any original research on Harry Smith's Anthology of American Folk Music. Its "Moonshiner's Dance" entry was the obvious place to start, as it was recorded right here in Minnesota.

But I soon understood it as the exception that proves the Anthology's rules — the only really Northern recording on the Anthology, for example, and the only cut making the sounds of recent immigration.

We are so satisfied by our dreams of a musical South that Duquesne and St. Paul (and even Hibbing) are a kind of terra incognita in America's musical imagination — so much so that my own geneaology has emerged as a critical source of information.  Let the Duquesne whistle blow.

I've long postponed my Duquesne research for when I can visit it and Clairton myself — maybe when I finally attend the Harry Smith Festival in Millheim, PA.  But now, I might not have to see the place at all — Bob Dylan and the internet may have just rendered my personal voyage of self discover entirely pointless!  Hallelujah!

Of course, the song may not even turn out to be about Duquesne, PA.  It may refer, for example, to the Pennsylvania Railroad train route the Duquesne that used to run from Manhattan's Penn Station to Harrisburg.  Or maybe it refers to the CSI Miami character, Calleigh Duquesne.  Bob likes the ladies, I think.

But I'm not concerned.  A Dylan song not being about something doesn't mean that this something won't provide plenty of fodder for research and analysis.


PS:  Note that Earl Hines was also from Duquesne, PA.  There's a great chapter in William Howland Kenney's book, Jazz on the River, that deals with the musical environment/cultural history of Pittsburgh and its environs.

For the sake of your story, I hope it's not a song about a bad call by a referee at a Duquesne basketball game.

Your grandfather came from Austria to Duquesne. And the statue on the front of "Tempest" is IN AUSTRIA. It's obvious Bob's still sending you messages - the question is, who did he employ to find out about you?

Hey Bob, I've been looking all over for that Lands End gift card my mother-in-law gave me last Christmas. Have you seen it? Thanks a bunch, The Celestial Monochord

behold, the first two verses of the song:

Duquesne called it depression
All that’s left for us to do right now is pray
Tempest rising from the East, opression
Knocking on the door, can’t get away

Well, they promised me to pull away the harness
But now it’s pretty clear to me that there’s no way
They’re ever gonna keep their promise
They said I lack the sense of freedom anyway
Well, to live outside the law you must be honest
So I guess I’ll have to stick around and play

well ryan, where do you got that info from? would be nice to know how reliable this is...

obviously from my promo copy

I am, as always (and maybe even more than usual), looking forward to the new disc, meantime driving myself to distraction trying to infer what I can from the titles. It's safe to say that Dylan may be running low on them. Gillian Welch recorded "Scarlet Town" (from "Barbara Allen" obviously) on her most recent release, and "Tin Angel" is the name of an early Joni Mitchell song -- perhaps Dylan's ironic vengeance on her for calling him a "plagiarist" awhile ago.

I'll give him a pass on "Tempest." Dylan points out that this one lacks the Bard's definite article (i.e., "The Tempest"). He says he based the narrative and melody loosely on the Carter Family's "The Titanic" -- whatever that means.

The Carters recorded two versions of it, one by the original trio, recognizable as the familiar "It Was Sad When That Great Ship Went Down." The other, more interesting "Titanic" was cut in April 1952 by a reconstituted "Carter Family," here defined as A. P., Sara, and children Joe and Janette. In terms of both lyric and melody, it's hard to beat the neo-Carter song, which is lovely and scary to boot.

Like the Carters, Dylan is now on to recording two entirely separate songs with the same title. Early in his career he was singing a version of the traditional "Roll on, John" and now has his own original, which rumor alleges is about John Lennon.

Well, we'll see. I am counting the days.

Clear your calendar: this year's Harry Smith Fest is Nov. 4 and features the Wiyos. See you in Millheim!

NPR posted a link to Duquesne Whistle stream on Facebook today (8/27).. haven't had a chance to listen, but figured if you hadn't yet seen /heard you , you could remedy that.

I am presuming that at least some readers have seen the "Duquesne Whistle" video released today. It's a terrific song, with plenty of echoes of old-time train songs (e.g., "K.C. Moan"), but we learn incidentally that Ryan (above) was funnin' us.

Or maybe Ryan got funned ... Great to hear from you Jerry! I haven't heard the song and haven't seen the video. I'm one of those people who want to save it up for when I can go to Ye Olde Recorde Shoppe and buy it all at once. I dunno, maybe I'll buy it in London. Back on 11 September 2001, I intended to do the same with Love and Theft - currently my favorite Dylan album, and possibly my favorite album of anybody's - but didn't get the chance, due to the mayhem. So, I feel like I have a kind of score to settle, or something. Glad you're liking what you hear, tho!

The song might be about Du Quoin, Illinois. Dylan may have changed the town name just enough to fit his musical needs. Du Quoin is near Carbondale, Illinois and there is a Carbondale mentioned in the lyrics. Furry Lewis lost his leg between Du Quoin and Carbondale while riding a freight train. An Amtrak passenger route (the Saluki, named for a local college mascot) still runs from Du Quoin to Carbondale.

This article answers the question I raised in an earlier posting on this thread.

Dylan's "Tempest" is indeed based on the 1952 Carter Family version of "The Titanic." It quotes the lyrics, prominently but not exclusively the opening line "The pale moon rose in its glory" (not unique to the Carters, by the way), and the words composed by Dylan can be sung to the older melody. "The watchman" also figures in the original, and other lyrics borrow or parody the Carters's. That may be plagiarism to Joni Mitchell, but to the rest of us, it's Dylan's continuing, brilliantly employed use of the folk process.

The LA Times writer evidently missed all of this, but at least he has some marginal awareness of Titanic ballads -- albeit, it seems, not this Carter gem -- in American traditional music.

I think that there are convincing reasons to believe that Du Quoin (IL) is meant here, mainly because Carbondale is just north of it.
For more details on this please check out on my analysis which you may find under the following link:
http://www.keesdegraaf.com/index.php/191/bob-dylans-duquesne-whistle-an-analysis

For anyone who may be interested, my review of
Tempest was posted here a few weeks ago:

It examines the album's roots in traditional music, everything from Child ballads to Sleepy John Estes and the Mississippi Sheiks. And I believe I am the only reviewer to catch the Gordon Lightfoot quote.