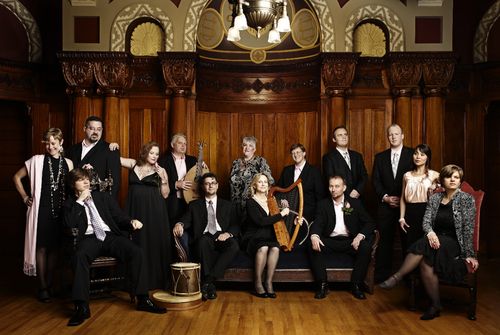 The Rose Ensemble will perform "Moonshiner's Dance" — for the first time, as far as I know, in 83 years

Minnesota's own Rose Ensemble, an internationally acclaimed music group, has notified me that they will perform "Moonshiner's Dance" at upcoming concerts called Songs of Temperance and Temptation: 100 Years of Restraint and Revelry in Minnesota.

This is stunning, partly because these just might be the first performances of Moonshiner's Dance in more than 83 years.

After five years of work on the piece's origins and reception, I've never heard so much as a rumor of any other performance since the original — the September 1927 performance by the house band of Frogtown's Victoria Cafe, recorded by the Gennett Record Company and later reissued on Harry Smith's Anthology of American Folk Music.

What the Rose Ensemble is about to do is rarer than any routine solar eclipse, black swan, or blooming corpse flower.

Moonshiner's Dance is actually a medley of even older tunes, mind you, and those have been performed and recorded countless times. But right now, I have no evidence that anybody has ever put them back together through that peculiar alchemy that makes them "Moonshiner's Dance." (Please write me if you have info.)

Naturally, there must have been other performances over the years. After all, learning and playing the songs and sounds of Harry Smith's Anthology has been a signature rite of passage for folk revivalists for half a century.

During the 1950s/60s Folk Revival, even those musicians who'd never heard, or heard of, the Anthology learned its songs and musical figures. That is, the Anthology supplied the Folk Revival with a canon — a repertoire of texts that everybody knew, even if they didn't know why. In turn, the Anthology contributed heavily to the Revival's influential ideas about America, memory, and meaning.

There's a hell of a lot to say about that, and I hope to publish a book about it one day. These are questions just too big to blog.  They're so profound, they're almost ... untweetable.

Still, here are a couple things I'll be thinking about as I look forward to the Rose Ensemble's performances:

The original Victoria Cafe Orchestra was not as different from the Rose Ensemble as you might think. My evidence indicates they were musically literate, sight-reading professionals, members of the Saint Paul Musician's Union, and primarily big-city jazz musicians. So why, on Moonshiner's Dance, were they playing the oldtime ethnic dance music — proto-polka — more associated with rural, outstate Minnesota?

The 1927 Minnesota State Fair had just ended a few days before the recording, and the Victoria Cafe Orchestra must have been playing for a lot of out-of-towners — or for city folk who had themselves been rubbing elbows with those out-of-towners. The band appears to be riffing on that. In Saint Paul, good-natured joshing about Lake Wobegon has deep roots.

It's also clear from my research that the Victoria Cafe was a cabaret-style night club. And it was perfectly commonplace for performers on a cabaret stage to develop simple themes or stories, such as the intermingling of rubes and slickers.  That is, we should have expected, all along, that Moonshiner's Dance might be programmatic.

Thus, we're hearing only the audible portion of an experience for all five senses. It's the soundtrack of a full American cabaret environment and, according to my findings, one very narrowly tailored to Saint Paul's University Avenue circa mid-September 1927.

I can't wait to see what the Rose Ensemble does with it. In a way, the ensemble's mission is to provide vivid translations, restating music that was meaningful in a very different time and place and giving it new significance in our time and our place.

I don't know how rarely they translate across such a long span of time but such a short spatial distance. While Moonshiner's Dance is certainly a creature of a very different era, it represents a place less than two miles up the road from the Fitzgerald Theater.

If we could tell the Victoria Cafe Orchestra that we'd be watching their tomfoolery recreated by the Rose Ensemble in the 21st century, I imagine they might ask us ... "What the heck do you see in it?"

[UPDATE: I've also posted a review of the show.]

Welllllll there was supposed to be a performance of the Moonshiner's Dance during the reenactment of Volume 2 of The Anthology at last years Harry Smith Frolic... But alas nobody worked it up, so it was skipped. This year we are re-reenacting volume 2, and I am certain that the Dance will be performed.

Thanks for the update! Yes, I thought about mentioning the Frolic and its upcoming reenactment of Volume 2. I've always wanted to attend the Frolic, but I can never seem to get there.

Moonshiner's Dance is technically challenging, for sure, but I think it's the Anthology's most important (certainly, its most jarring) transition point.

Harry Smith used the recording as the culmination of the first half of Volume 2 -- it's how the volume's secular half finally blows its load. When Volume 2 wakes up again the next morning, it's in church on Sunday morning.

Looking at your copy of the 3-volume Anthology, you can see that the exact mid-point falls right between Moonshiner and the next song, Must Be Born Again.

So literally, as well as figuratively, the center of the Anthology is the silence that follows Moonshiner's Dance. After 83 years, it's great to hear that silence finally getting filled with music.

Best of luck with the reenactment -- send me a recording, if someone makes one!
_