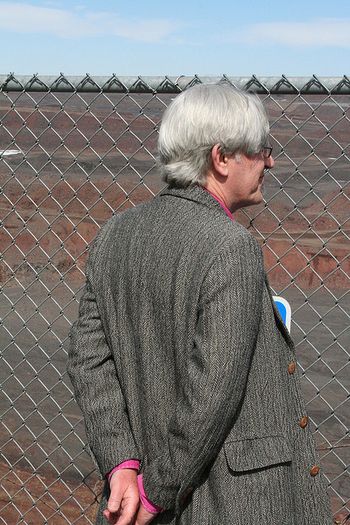 A noted Dylan expert and critic offers his home in France (and himself) for conversation.

Early one morning in March 2007, I was riding in one of those tourist buses that deliver senior citizens to casinos — tinted windows, plush seats, TV screens in the ceiling.  That foggy Minnestoa morning, this bus was filled to capacity with about sixty Bob Dylan scholars.

The trip, from Minneapolis to Dylan's hometown of Hibbing, was the opening event of the largest scholarly Dylan conference ever held.

In my aisle seat, I talked to the stranger in the window seat next to me.  He turned out to be an evangelical Christian Tennessean researching Dylan's sprituality.  A smart guy — curious, thoughful, and original.

Still, it was hard to concentrate on the conversation.  If the first guy I met was THIS guy, who else might be slouching toward Hibbing on this infernal bus?

Immediately across the aisle, an Englishman and an American were engaged in a lively discussion (about Bob you-know-who).  Eavesdropping, I gathered that the Englishman — proper accent, eccentric dress, soul patch — was Michael Gray himself.

In 1972, Michael Gray authored the world's first critical study of Dylan's work and, in 2007, had recently completed The Bob Dylan Encyclopedia, offering as much obsessive Dylan knowledge as any book ever published.  A kind of paper cinder block, The BD Encyclopedia comes at you like an authoritative reference but winds up snaring you in an idiosyncratic maze — the strategy reminds me of the Anthology of American Folk Music.

Recognizing a once-in-lifetime opportunity, I turned to Michael Gray and asked the obvious question:  Who threw the glass in the street?

It was a rhetorical question and a bit of a joke — after all, the answer represents the qunitessentially unknowable cypher that is the object of all Dylanology — so I was gob smacked when Gray actually knew the answer, and offered a couple minutes of historiography contextualizing both the answer and the question itself.

We talked, excitedly and with a lot of laughter, most of the way to Hibbing. During the long days of the Dylan conference, I'm not sure what I would've done without Michael Gray — I kept seeking him out whenever I felt like a wallflower and needed a friendly conversation.

Not the kind of Dylan author who doesn't suffer fools (I should know), he was generous with his time and knowledge, listened closely, laughed easily, gave useful advice when I asked for it, remembered my name.  I find myself repeating his anecdotes in my own conversations even today.

Days later, at the end of the conference, Gray gave the closing keynote address.

Built around a series of film clips of Dylan throughout his career, Gray described the "moment" that surrounded them — the atmosphere, the shocks and conflicts, the relationships and revelations going on in Dylan's life and work, and in the life of the United States and the globe.  He was contextualizing the clips, breathing new life into them, and the effect was moving and revealing.

That reconstruction of gone significance is at the heart of my own efforts at cultural history. The question for me is no longer "what does it mean?" but rather "what DID it mean?"  The change in tense seems to transform the entire landscape of possibility and impossibility.

I haven't had the opportunity to see him speak since, but Gray does speaking engagements — it would be interesting to see what he's doing now.

Given all of this, I've been very amused to see that Gray has been offering himself up as a conversationalist to paying Dylan fans. You get to talk (and talk) about Bob Dylan with one of the world's leading Dylanologists, and enjoy his wife's gourmet cooking, in his lovely home in southwest France.

It's one of those vacation ideas you read about occasionally in the "news of the weird" — it's utterly cracked, but you would surely do it if you had the chance.

Mostly, I keep chuckling about the mindset that makes it possible. Are authors who aren't assholes so rare that you can charge admission to talk to them?

During the conference, I sought out Michael Gray because his very presence relaxed me, amused me, made me feel smart and attractive, and — most of all — because he had very interesting things to say. Who recognizes having this effect on people and thinks, "Hey, I can charge for this"?

I mean, I've been thinking about charging people to NOT talk to me!

Sometimes I think Dylanaolgists look to deeply. Especially Weberman who resently said that Dylan as rasist because he didn t talk to President Obama during his recital there. Dylan has said himself he just writes the stuff, it comes out naturally. So to look for deep meaning like Dylanologists do is not really what Dylan himself indends. When Dylan says the vadndels stole the handels, there is no deep meaning in it. Its just a word play its like saying the clouds in the house. No great meaning just a word play.

"There is just one grammatical dent in this dexterity". Will you be charging Michael, the no-asshole, to talk to him?

Michael is wrong about quite a few things and some of his research is extremely sloppy.

Have you heard of OCD?

"I mean, I've been thinking about charging people to NOT talk to me!"

Laughed out loud-
I wonder if someone would pay me not to start a Bob blog- I'm working on it-
Do we really need another Dylan blog?
Well- there will be at least one more.
Like his tour, it never ends.

Anyway-
I did see that Michael Gray new business venture and was kind of amused and kind of horrified.

Were Dylan racist, which he is not, it would be reasonable to expect it to come out subconsciously, which is what you are more than implying his lyrics to be. As for the degree of conscious artistry, the Dylan world contradicts itself; even individuals contradicts themselves. It's not EITHER OR; Dylan himself said that Norman Raeben taught him to become a conscious artist, so he became one. He also said in around '78 that "the meaning comes later". So one might later identify a literary influence that Dylan was not consciously thinking of when he wrote a lyric, and in turn extrapolate meaning in Dylan's "stream of consciousness" or subconsciousness at the time. "The meaning comes later". Word play on its own is not the "genius" Dylan fans routinely claim for a songwriter whose lyrics can supposedly never be really understood.

A.J. Weberman is a piece of trash and doesn't know what he's talking about. My God, if Dylan were racist, would he have married a black woman???????? (He did, it's just not that well-known a fact.) Weberman should put himself in a trash can where HE belongs.

Uh... who threw the glass in the street?