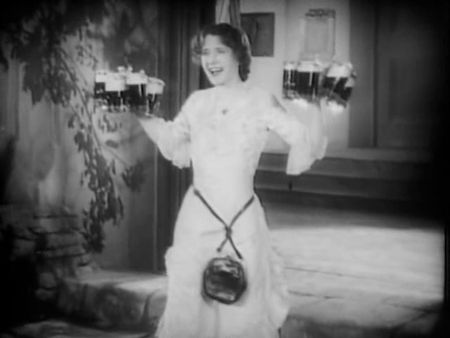 Pardon this bit of throat-clearing.  Hope you had a good summer.

Twice in the past few weeks, TCM aired the 1927 silent film The Student Prince in Old Heidelberg.  Made in the same year the Victoria Cafe Orchestra recorded Moonshiner's Dance, and sometimes just as sodden with alcohol, the film might still retain the world's record for the most beers consumed in one movie — something like 500 steins worth.

A clip from The Student Prince in Old Heidelberg is currently available on YouTube. It's a well-chosen clip, featuring a bit of this beer-guzzling and illustrating some key plot elements.

In it, Prince Karl Heinrich watches from a balcony as his new love interest, Kathi the barmaid, delivers beer to grateful college students in Heidelberg.  A sheltered young prince of a fictional European nation, he longs to experience the pleasures and freedoms of normal life — and his time has finally come, now that he's been sent to Heidelberg, a notorious party school.

The clip ends with Prince Karl pouring himself a glass of water and drinking it, but the clip ends a couple seconds too early to show the prince dashing the water glass to the floor in a fit of frustration.

The 1927 audience out there in the theater seats was living under Prohibition, of course — for them, beer-guzzling violated the Constitution of the United States.  It must've been easy to identify with Karl's frustration, and with his voyeurism.

On the other hand, the audience wasn't all that thirsty, since Prohibition had failed to keep virtually anybody sober.  In another scene, as the students hoist their steins and sing a drinking song, the song's sheet music suddenly appears onscreen much like a silent-film dialog card.  The sheet music stays onscreen a good long time, giving the audience time to strike up a sing-along right there in the theater.

The scene leaves the impression that the audience could not only get a drink if they wanted one, but might have been actually drunk at the time of the screening.  Hip flasks were everywhere, of course, and I'm reminded that the largest theater firm in the Minneapolis-St. Paul area was partly backed by the area's most prominent brewing family.  (I'll have to look into this ... anybody have info about movie theaters doubling as speakeasies?)

The Student Prince in Old Heidelberg is set in both Germany and a fictional Old World nation.

The common folk in the film look a little less stereotypical than the lederhosen-clad townsfolk in early monster movies, but they are pretty quaint.  I've often seen such characters pictured in 1920's newspaper advertisements — always for liquor-related items such as malt sold for home brewing of strictly non-alcoholic "Old World" beverages (wink wink, nudge nudge!).

It's clear to me that the German peasant image immediately brought beer to mind for Prohibition-era viewers — the dirndl as the era's "4/20."  Notably, the German immigrants who dominated the brewing industry were among the fiercest opponents in the battle against the ratification of the 18th Amendment.

As the historian working on Moonshiner's Dance, all of this has me jumping out of my seat during The Student Prince in Old Heidelberg.

Both documents are booze voyeurism — vicarious drinking binges for the already drunk — delivered with a Bohemian accent.  They both represent the way alcohol became much more than a drink during Prohibition.

By 1927, booze had evolved into a signature experience and an organizing metaphor of the era.  At least in a lot of the cultural texts the era left behind, it was a pervasive medium that oriented and disoriented everything — even, or especially, when it wasn't around.

Wasn't Heidelberg also famous for its tradition of duelling?