Gennett Gets Remembered in Indiana 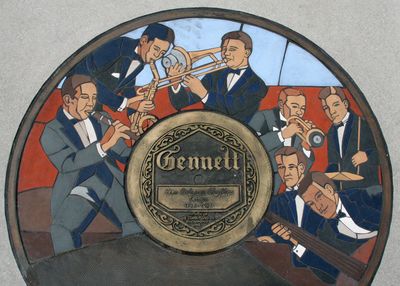 The New Orleans Rhythm Kings on the Walk of Fame

I recently made a one-day pilgrimage to a place called Richmond, a small Indiana town (pop. 39,000) on the Ohio border.

My reasons to do it were complex, but above all else I wanted to understand why the town hadn't preserved the Gennett Record Company’s recording studio when it had the chance.

Richmond, after all, was the home of the legendary Gennett Records, which released the first real masterpieces of recorded jazz – the influential early records of King Oliver with Louis Armstrong, the game-changing piano solos of Jelly Roll Morton, the first recordings of Bix Beiderbecke and of Hoagy Carmichael.

In essence, it was Gennett that captured early jazz in exile in the Midwest.  Without knowing it then, Gennett preserved many of the critical coming-of-age moments that jazz experienced as it found its voice in the wide world outside of New Orleans.

And jazz isn’t even my main interest.  Gennett also recorded scads of other artists at the core of my sense of what the 1920’s were musically all about – Blind Lemon Jefferson, Charlie Patton, Ernest Stoneman, Fiddlin' Doc Roberts, Uncle Dave Macon.

The company also made a few experimental mobile recording trips.  Their 1927 sessions in St. Paul, Minnesota, resulted in “Moonshiner’s Dance” by Frank Cloutier and the Victoria Cafe Orchestra.

Visit Richmond if you can find the chance, and prepare by reading the work of Rick Kennedy, the guy who's done much of the heavy lifting on the history of Gennett and jazz in Indiana.

In Richmond, I really saw how Gennett was a little side project of a major piano company in town.

In the office of the Starr-Gennett Foundation, they have a mind-boggling old photo showing the Gennett recording studio looking like a little rickety wooden shack tacked onto the ass end of the sprawling, brick factory complex of the Starr Piano Company.

At the site of the actual studio, you appreciate how inadequate the structure really was, especially for its intended purpose.

Simply too much imagination would’ve been needed, at the right moment, to envision the site as a global tourist destination, or to anticipate the strong sense of sacredness that many visitors experience as they approach the site of the studio.

This should be a challenge to our own imaginations as we contemplate the demolition of St. Paul’s comparatively palatial Victoria Theater.

The Starr-Gennett Foundation, along with various boards and booster types, have spent a lot of funds commissioning a series of mosaic emblems for a “Walk of Fame” at the former site of its famous studio.

And their Walk is a pretty effective example of public commemoration.  It serves to take visitors the hundred yards or so from the remains of a factory building (stabilized and converted into a performance space) to the remains of the studio’s foundation.

A number of these emblems stand out as especially successful visually, and the Walk invites contemplation and discussion – even on the cold February day when I saw it.

Enlightened individuals will of course want to see the marker honoring Moonshiner's Dance - so far, that noble effort is unrecognized.  While the recorded output of Frank and his band totaled just two sides, one of those sides is the only Gennett-label recording on the Anthology of American Folk Music.

The Starr-Gennett Foundation estimates the still-expanding Walk could ultimately feature 80 artists, so we'll see what happens. I imagine a scene in which the Walk features increasingly obscure artists – maybe a cow that once mooed on a Gennett sound effects record, say. Around that time, we would have to start a letter-writing campaign for Frank and his boys (although a check-writing campaign just might make a more lasting impression). 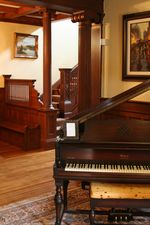 A member of the Starr-Gennett Foundation (you can join too) volunteered to take me on a whirlwind tour of Richmond, which was considerably more action-packed than you might imagine.  In fact, one day was clearly not enough time.

I was often reminded of my reaction to first seeing Hibbing, Minnesota. Although Hibbing is considerably more disorienting, both places left me a little ashamed that I had expected so much less of them than I actually found.

Does the “anonymous little nowhere” in my imagination exist at all?  The suburb I knew in my childhood certainly seemed like nowhere at the time, which might be my problem.

Anyway, I wish I had the time and stamina to write up the things I did have time to see in Richmond:

My mind keeps returning to the Historical Museum’s beautifully preserved Conestoga wagon, emblematic of the period when Richmond was at the western frontier of American expansion.

I used to associate Indiana's identity as the “crossroads of America” with the Indianapolis 500, but today I'm more likely to think of that Conestoga wagon in Richmond.  I wonder if the Rollingstone Colony passed through there on the way to Minnesota.

Certainly, Gennett employees undertook a trip from Richmond to Minnesota in 1927.  In the coming weeks, I’ll report a little of what else I learned about Gennett’s activities in St. Paul during the rest of my week-long stay in Indiana.

You have a number of Hoosiers in your internet admirers, I quite apologize for not having had word of this until too late.

As a lifelong native of Richmond, I am glad that you had the opportunity to visit our town. Many of us "oldtimers" are very proud of our heritage and Gennett ranks at the top. Please come back and learn more about us. We do have a lot to offer in the way of history.

WayNet.org would like to invite your readers to learn more about the Richmond/Wayne County area here: http://www.waynet.org. They can also take a look at that wonderful Conestoga wagon you mention, here: http://www.flickr.com/photos/waynet/4359945208/. Thanks for sharing this information about your visit to our community!

Having been involved with the genesis of the Walk of Fame, your article is very gratifying. I'm glad you enjoyed it! Many thanks for spreading the word.

JAZZ ROOTS this Sunday is going to take a look at some of the Jazz & Classic Blues recorded at the Gennett Records studios in Richmond Indiana and in the field by Gennett and issued on their various labels (Gennett, Champion, Supertone, Superior, etc.) Tune in on Sunday at 8pm (KSDS 88.3FM & Jazz88.org) You'll hear Alphonso Trent, Zack Whyte, The Blackbirds of Paradise, Lizzie Washington, & many more.

The real question is whether or not you visited Tom Raper's RV whilst in Richmond. If you didn't, for shame! Free hot dogs and America's largest RV selection-- with a name like "Raper," what's not to trust?!

In a private email, a reader writes:

The emailer notes that efforts to get the Indiana State Historic Preservation Office to recognize the site have not succeeded.

On September 11, 2010, Starr-Gennett had the 4th annual Walk of Fame celebration. This year the theme was Blues and BBQ. Inducted into the Walk of Fame for 2010 were legendary blues singers Alberta Hunter, Lonnie Johnson, and the gospel group Pace Jubilee Singers.

I was a student at Earlham College in Richmond in the 1980's. I do remember hearing that Richmond had been the home of Gennett, and thus a significant location in jazz history, but it was definitely not noted all that much in the town or at the school. In spite of the fact that I was interested enough in jazz to have a weekly jazz show on the college radio station for over a year, at that time I didn't know enough about the history of the music to really appreciate the role of Gennett. In retrospect, the former presence of the studio explains in part why we had some fairly big jazz figures play in little Richmond during my time there, including McCoy Tyner and Lionel Hampton. But, sadly, in all my time there, I never visited the Gennett site, or heard of anybody else doing so.