Part of a series wherein I propose musical contexts for
"The Moonshiners Dance Part 1," aside from The Anthology
of American Folk Music, and present illustrative sound files. 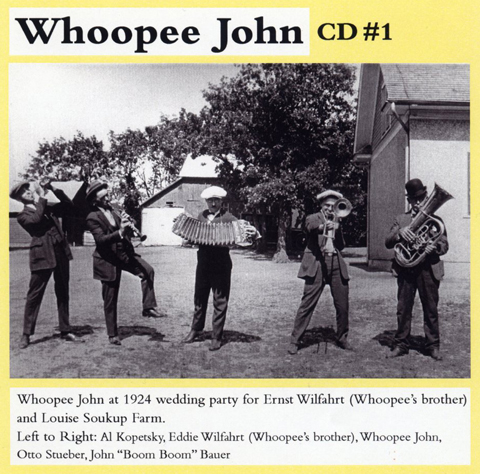 Older Minnesotans always seem to remember Whoopee John Wilfahrt — so much so that it's startling how little-known he is to everyone else.

Whoopee John made his first recordings in Minneapolis in September 1927 — just across the river and about a week before Frank Cloutier and the Victoria Cafe Orchestra recorded "The Moonshiners Dance."
He would later become hugely influential across the Upper Midwest, and because they circulated in a small world, Cloutier and Wilfahrt were probably aware of each other. Still, I don't see Whoopee John's influence in "The Moonshiners Dance."

Instead, his early recordings can serve as a good example of the old time ethnic music being played across the region at the time.  "The Moonshiner's Dance" is also a good example of that music, and is partly a satire of it.
•
Explanations of Whoopee John's nickname differ, but it's pretty clear to my ears — Whoopee John whooped, just like Frank Cloutier's boys, except at very deliberately chosen moments in the performance.
Neither the whoops nor the nickname appear on Wilfahrt's 1927 recordings, but they're both firmly in place by 1933.  Perhaps "Moonshiners Dance" inspired Whoopee John to start whooping — but then again, similarly exuberant interjections were common across pre-War genres of vernacular social dance music.
Although Whoopee John's style doesn't sound much like "The Moonshiners Dance," it doesn't sound much different either.  To get from Wilfahrt to Cloutier, you mostly need a small shift in meter and tempo, and a huge change in attitude.  The Victoria Cafe Orchestra satirizes rural polka music like Whoopee John's from a cosmopolitan, Jazz-Age perspective.

But keep in mind that old-time ethnic performers themselves relentlessly goofed on their own rustic, old-world personas.  "Whoopee John" was, in essence, a satirical character played by John Wilfahrt.  There's an economy of satirical exchange here ... with its liquidity provided by good times and bootleg alcohol.
Cloutier and Wilfahrt used similar instruments — after all, this is music from the "Brass Age" to which The Anthology otherwise turns its back. Both bands use instruments you'll also find in 1920s Chicago jazz bands, and most everywhere else at the time — trumpet, clarinet, bass horn, a little drum set.  A signature of Wilfarht's band was the addition of the German button accordion.
Wilfahrt's later stuff is much easier to find due to its great popularity. To my ears, it takes on a slightly slick big-band aesthetic that I find a bit bland and cloying.  I much prefer Whoopee John's early stuff from the 1920s and early 1930s — the New-Ulm, Knights-of-Columbus-hall-wedding Whoopee John.

It's clearly played by a small, spirited combo of townspeople.  I like the hint of parlor, or even chamber music formality.  I don't know, maybe it's a DNA thing, given that this music's genealogy so closely mirrors my own.
•

The sound file is an MP3 of about 2.6 MB, and it chains together three abbreviated clips from early Whoopee John 78's.  I chose the cuts because I like them, and because they sound most like "The Moonshiners Dance."  Wilfahrt also recorded appealing waltzes, schottishes, marches, etc.

I've done this several times with excellent results. It's great to have this music available in such a high-tech fashion — usually, I'm crawling around on the floor in the basements of used vinyl stores.
I recommend getting either the Whoopee John Historical Music CD #1, or #2, or both.

Kurt -- Thanks for the Whoopee John posting. As an oldfahrt who, as a teenager, attended dances where Whoopee John played, I'd like to add to what you wrote.

The rural Scanadinavian community where I grew up (Harris, MN) consisted of two groups: a religious component that never danced nor drank, and a secular one that craved Saturday night. There were 3 dance halls in the area: the Eagle's Hall in Rush City, and The Topic and Pine Camp at Pine City. The Pine City dance halls were big enough to import New Ulm bands for Saturday night, among them Whoopee John, Fezz Fritche, The Six Fat Dutchmen, and a few others whose names escape me. The dance halls were full, and there were no jazz influences; it was all German, all the time dance music: waltzes, polkas & schottisches. The reason for going there was not to listen to the music, but to get drunk, dance, and forget that your fields were full of rocks that needed to be picked up and hauled away.

If Whoopee John was aware that he was a self-parody, you couldn't tell from his demeanor as band leader. He looked like he was living in the moment, as all good musicians do, and having as good a time as the rest of us. And, in those old pre-post-modern days, giving anyone at the dance the opinion that Whoopee John was a self-satirical character playing himself would be guaranteed to get you a bloody nose.

This was a long ways from big-city society or dance orchestras like Cloutier. They undoubtedly had a much wider repertoire, including the ability to sound sort of like a New Ulm dance band. Still, you would never mistake Cloutier's group for Wilfahrt's.

Great report from the field, Lyle. Very vivid, and it almost makes me wish I were born in that same place and time ... except for the field rocks ... and the bloody noses ... and ...

Well anyway, as I say, you talk to Minnesotans over, I don't know, 65?, and they definitely know about Whoopee John.

Re-reading your comment, it's not quite clear how YOU feel about the satirical element -- only that if one had suggested it, one would have been belted in the nose. After all, I've been threatened with bloody noses for saying things that are true plenty of times. Over and over and over.

I recommend for anybody interested Victor Greene's (misleadingly named) book "A Passion for Polka: Old Time Ethnic Music in America." It goes pretty deep in exploring the element of ethnic humor in the various performance styles.

Also, James P. Leary and Richard March did a very thorough study of Whoopee John and the (misleadingly named) "Dutchman" style he inspired, with focus on these very issues -- the comic ethnic stereotype, the tension between cosmopolitan sophistication and rustic clowning, and all of the above.

It's called "Dutchman Bands: Genre, Ethnicity, and Pluralism in the Upper Midwest." I know, I know ... punch in the nose ...

Because we all grow new cells every 6 months or so, I'm not the same person I was in 1952 at age 16, trying to convince older people to buy me beer at the dance hall. So I can't tell you precisely what I would have thought about self-satire back then. I think, though, that if the question had come up, I would have pointed to the difference between Whoopee John and an obvious case of self-satire from a band that was a generation older: Olle i Skratthult and his orchestra (see, for example, http://www.catfish1952.com/Olle.html). Olle's whole shtick was that he was a Dumb Swede who told Dumb Swede Jokes. He'd play the fool for an hour or so, and then the band would play dance music. They were very popular among the first generation in Minneapolis, the American-born children of Swedish immigrants -- the one's who were embarrassed because their parents were so out of it. Early Bluegrass Bands also had a self-satirical clown: the bass player invariably dressed in an outlandish costume and told dumb hillbilly jokes. My take on it was that Whoopee John lacked that extra dimension of self-satiricality. His band just got on the podium and started playing.

I just happened onto this website by accident or maybe coincidence because this morning I was thinking it is time for me to contact Dennis Brown again to refresh my collection of Whoopee john tunes.. I got a real kick out of the comments of the fellow from Harris, Mn. because I'm from Pine City which he mentions and certainly went to dances at the Pine Camp Pavilion which was hard by the shores of Cross Lake near Chengwatana.. It was just great! God knows there was just nobody that could produce the kind of melodies that came so easily to John Wilfahrt.. Beyond that he was just plain easy to visit with during intermissions.. Once in St. Paul at the American House I went into the Beer Stube where Whoopee John was quaffing a brew at the bar.. I was a nervous country kid of 18, but I blurted out the fact my mother liked his music and she was from a small town near New Ulm.. That was too much for Whoopee and he asked what kind of beer I'd like so I stammered a bit and came up with "Budweiser". With that stroke of good fortune, Whoopee John purchased for me my first beer in public and at age 18 yet.. I'll never forget that moment..
Fred Hodge

I think I recall the late Johnny Carson once talking about his early days as a disc jockey, and doing a polka show on a station where the management banned mentions of John Wilfahrt's last name. You had to say instead "Whoopee John and his orchestra."

Carson crossed over the line (and may have gotten himself fired) by breaking the rule and going for a gag, announcing "Whoopee John Wilfahrt, and his band will play."

(Of course, if he hadn't gotten fired there, the rest of his career might never have happened...)