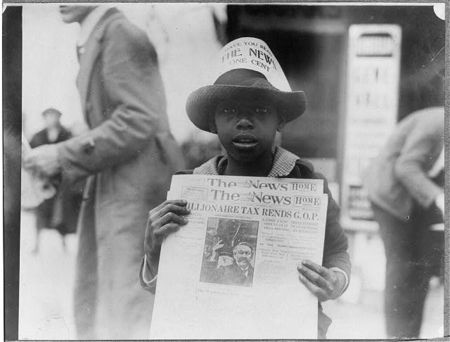 I was wading through the Archeophone catalog yesterday, planning my next purchase.

... It's an incredible record label.  Everything I've gotten from them has been a hoot to listen to, and has revolutionized my perceptions and tastes ...

And I finally noticed their series of reissues of "Hit of The Week" records.  As the Archeophone website describes them,

They sold on newsstands during the Great Depression for 15 cents and quickly became the best-selling records of the early 1930s: the laminated flexible cardboard records known as "Hit of the Week." Featuring the top songs of the day, performed by some of the most noted jazz and dance musicians (often under pseudonyms), Hit of the Week records provided just that — one hit, once a week — to an American public with hardly a dime to spare but hungry for great music by great artists.

As always, it seems, I thought of Harry Smith and the Anthology.

Back in July, I first realized that phonograph records were once distributed on city streets at newsstands and by newsboys.

As William Howland Kenney wrote in his brilliant Chicago Jazz: A Cultural History, 1904-1930:

... the newsboys of the Chicago Tribune and Chicago Defender regularly carried copies of the latest records of the week along with their newspapers.  They sold the disks at $1 apiece; for many customers the records were as important as the news.

Something now made real sense for the first time.  The funny, fake headlines Harry Smith wrote for his liner notes to volume one of the Anthology of American Folk Music may have been based on actual experience.

Newsboys might really, in fact, have yelled something very much like "Georgie runs into rock after mother's warning!  Dies with the engine he loves!"

Interestingly, two of the performers on Archeophone's "Hit of the Week" CDs — Vincent Lopez and Rudy Vallee — have loose connections to The Victoria Cafe.

Therefore, I might have to buy these ... although, times being what they are, I may have to wait until this music is finally released on cheap pieces of Durium.

I discovered your blog while researching the monochord and The Anthology of American Folk Music.
Astrophysics, jug bands, early country music...I love it!
This is a fantastic blog. I'm very happy I discovered you.