Three Vignettes on Music and Geography 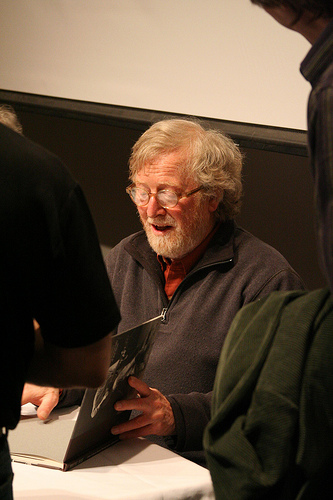 I heard John Cohen tell a story.  It was at a private party, so I'm not certain it's appropriate to write about here. But ... but ... it was such a GOOD story.
As I remember it, at least, he was teaching or lecturing a couple years back at a college in North Carolina.  There, he discussed his work in the late 1950s, finding old people in the hills of Madison County, North Carolina, who still sang very old ballads without instrumental accompaniment.  They just opened their mouths and sang 500-year-old songs, all alone.  It had a spooky, lonesome, ancient-sounding effect.
And in those 1950's, that style seemed to be dying right before Cohen's eyes as the old folks themselves died and their grandchildren were passionately seized by jukebox rock 'n roll.  Cohen, he felt sure, was capturing this music's death mask at the instant of its extinction.
After the lecture, a young woman in the class came up and told Cohen that her family was from rural North Carolina and was still singing these old ballads in this same way.  The tradition had, in fact, survived and was thriving, having been passed down to her through many generations of her family.  She even sang a little for Cohen to show him what she meant.
Cohen was puzzled, knowing that he and people who took an interest in this work had scoured every inch of those hills, looking under every rock in all of Appalachia trying to find the last remnants of this folk tradition.  Those hills had been picked absolutely clean decades ago.
On a wild hunch, Cohen asked her if anybody in her family had ever gone to the University of California at Berkeley, where Cohen's work on these ballads became very popular.  Oh sure, she said.  Everybody in her family went to Berkeley — her dad, all her aunts and uncles, her grandparents, her family pets, and so on and so forth, etc.  I seem to remember she was about to go there herself.
This young woman and her family were indeed from North Carolina, and this style of singing was indeed a folk tradition from their part of the country.  And it was indeed being passed down to her via her family, one generation to the next.  Being young, and perhaps not a history major, she neither knew nor much cared that the singing style had gone into exile in Berkeley for a little while before coming back home to the North Carolina hills.
And she was not wrong.  The authentic bearers of real folk traditions — if you wanna talk that way — almost never know exactly how the music comes down to them.  In her case, this folk music is thriving in her family as a folk tradition, just as sure as it ever did in anybody else's family.  She had plenty reason to be proud.  She was not wrong.  She was right.
#2

In the 1950's and 1960's, Barry Ancelet grew up in Louisiana speaking Cajun French.  He studied the French language in Louisiana high schools and colleges, where teachers always insisted that Cajun French wasn't French at all — that it literally had nothing to do with the French language.  Ancelet accepted this without too much worry.
And he never paid much attention to Cajun music, even though (or because) it was always around.  In many similar stories I've heard, the protagonists often think of the traditional music they grew up with as low — a weakness of ignorant country trash.  In his article in the great collection Sounds of the South (which is where I get this information), Ancelet isn't explicit about his own early attitudes toward the music.
In any case, in the early 1970's he spent an academic year in France, where he felt homesick and isolated.  One momentous night in Paris, at a concert of Cajun music, he underwent a shattering conversion experience.  He realized that he'd been systematically trained to be ignorant of himself and his own surroundings.  Everything he thought he knew about his own language and his own culture turned out to be crazy.
He immediately sensed what he should do with the rest of his life — he went back to Louisiana and ultimately became one of the founders of the academic study of Cajun and Acadian culture.  Tonight, I see that Wikipedia tells us he's from Louisiana and what he does now, but doesn't mention any conversion experience — least of all in France.
#3
In the past several months of my research into the Moonshiners Dance, the trail has finally led me to the mostly unknown, yet much-maligned traditional music of my various homelands.
In the past few weeks, for example, I've been listening with mounting enthusiasm to Down Home Dairyland.  Originally a radio show, I know it as 40 episodes released on CD, with an accompanying listener's guide.
The hosts are Jim Leary and Rick March — the Gilbert and Gubar of polka music — two folklorists who've been exploring the traditional and ethnic music of the Upper Midwest since the late 1970s.

Their work, and that of other musicians and scholars in their field, is rapidly being hauled aboard here at the Institute for Astrophysics and the Hillbilly Blues.

For now, I draw your attention to program #21 of Down Home Dairyland, which deals with the ethnic music of Stevens Point, Wisconsin.   Apparently, if you walked into a hall in Stevens Point today, you'd have a good chance of hearing polka that's audibly and vividly Polish, feeling a little like the crooked-metered concertina recordings made by Polish immigrants in the 1920's.

And why not?  The area was heavily settled by Poles in the mid-1800's and again in the early 1900's.  Wouldn't the ethnic music of Stevens Point sound pretty damned Polish?
Not necessarily, it turns out.  In the mid-20th century, the sound that dominated among Stevens Point polka bands was the German-sounding oompah style popularized by Minnesota bandleaders Whoopee John Wilfahrt and Harold Loeffelmacher.  Their styles influenced bands far and wide as Whoopee John, especially, became a kind of regional hero like Charlie Poole did in the southeast.

By the late 1950's, though, some younger Stevens Pointers grew weary of the "arranged and mannered" German sound and the sedentary stage presence of the bands.  The more authentically European Polish styles they found among bandleaders from Chicago and Milwaukee were aggressive, improvised, visceral — they felt more like rock 'n roll, and more authentic at the same time.

So, there was a Revival — Leary and March call it a "resurgence" and a "revitalization" — of explicitly Polish music among Polish bands around Stevens Point.  I imagine that, today, those mid-century revialists are easily old enough to have great grandchildren who might know only that their family came from Poland in the 1850's, and that they're learning to play Polish styles from great grandpa.

I won't try to squeeze my own sudden attentiveness to the ethnic-American styles of the Upper Midwest into a little vignette.  Maybe that's for you to do.  But I've been brought back north precisely because I wanted to contribute to the understanding of Harry Smith's influential collection of southern music.
I've seen that pattern over and over again in other people, and one of the things that surprises me most is my own surprise that it's happening to me.