A Geography of the Anthology 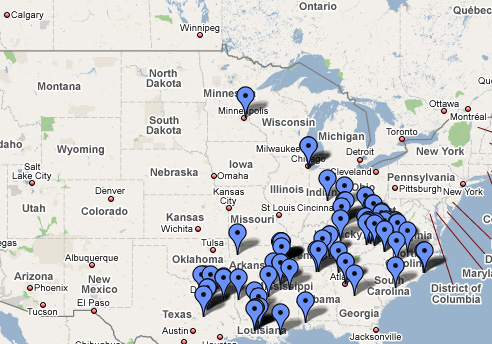 For two and a half years, I've tried to explain to people why I'm dedicating so much time, energy, and earnings to researching "The Moonshiners Dance," recorded in Minnesota by Frank Cloutier and the Victoria Cafe Orchestra in 1927.

It's impossible to express in a few words.

Usually, I've waved my hands in the air, describing a hypothetical Google Map showing the geographical origin of each cut on Harry Smith's 1952 Anthology of American Folk Music.

On such a map, "The Moonshiners Dance" would stand out like a sore thumb, completely alone as the only selection from anywhere near "us" — me and the person I'm boring.  In the past week, I asked myself, seriously, why does it have to be hypothetical?

And so, Google Maps and I present A Geography of the Anthology.

The Methodology of a Geography of the Anthology

In creating the map, I used the 1997 Anthology liner notes and some Wikipedia to choose a location that most shaped each Anthology selection.  This was not easy, especially limiting myself to one "pin" per recording.

But I gave it a shot and didn't much fret about it.

For example, Henry Thomas' work is a profound contribution exactly because it's so richly about being unstuck from any particular place — it's all about the road.  I put him in his home town in the state of Texas.

Many of the Memphis performers were from other communities in the same region, but it matters that the Memphis Jug Band is from Memphis, regardless of where its members were born.  So there they are on Beale Street.

I've made an attempt to be accurate but not precise.  Look very closely at Memphis.  Nine Anthology selections belong in Memphis, in all fairness.  I've stuck my pins every block or two all the way down Beale Street, even though I don't really know where in Memphis these people did their thing.

Sometimes, it was tempting to emphasize the isolation of "The Moonshiners Dance" by skooching my decisions southward.

The two selections by Chicago church congregations complicated my visual argument.  Those congregations and their recordings are products of the "great migration" of African Americans from the South to the great industrial cities of the North.  In a sense, they illustrate how far north the southern culture represented in the Anthology managed to flow.

I could have placed those congregations in the southern states where their leaders were born, but that would have been so wrong on too many levels.  For one, the music came out of a very distinctly Chicago experience.  I decided to trust the viewer to understand what those pins represent.

Ken Maynard was probably the hardest to place.

He was raised somewhere in Indiana, but "claimed Texas as his home," according to the liner notes.  He traveled around as a rodeo and circus performer, worked as a real cowboy, and went to Hollywood in 1923, where he was billed as "the American Boy's Favorite Cowboy."  His photo makes him look like a little Midwestern kid playing dress-up.

So where do you put Ken Maynard?  A random spot in Indiana?  A random spot in Texas or in "The West"?  In Hollywood?  I decided that his song describes an image of the West in the mind of somebody who was from somewhere else.  I placed him as an Indiana boy dreaming of cowboys and Indians.  Maybe you have another idea.

I posted a comment on my blog the other day, and it was there, and then it was gone. Anyway, your post here addresses most of my questions -- except, I think: so why would old Harry include a northern urban dance tune such as Moonshiner's Dance on an almost exclusively rural southern collection? What did he hear in it that made him think it belonged here?--while excluding contemporary "folk" artists of other regions, such as, say, Lydia Mendoza or Gene Autry. (Though I hadn't realized that Ken Maynard was a movie cowboy. I think I'd locate that tune in Hollywood, since that is where the singing persona of Ken Maynard was probably born.)