The Anthology as Tarot Deck 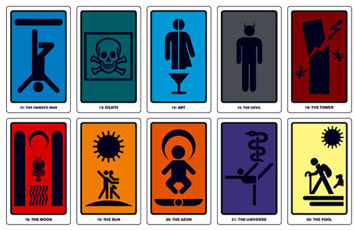 Harry Smith's Anthology of American Folk Music is so well established as a canonical text that you'd think Smith must've had tenure somewhere like Harvard ... he didn't.  And it's easy to miss how perverse an idea the Anthology originally was.

As Greil Marcus wrote in the book that launched a thousand ships, Invisible Republic:

... the Anthology was disguised as a textbook; it was an occult document disguised as an academic treatise ... This was in Harry Smith's grain.  A polymath and an autodidact, a dope fiend and an alcoholic, a legendary experimental filmmaker and a more legendary sponger, he was perhaps most notorious as a fabulist.  He liked to brag about killing people.

For generations before him, Smith's family was deeply involved in the more marginalized traditions of American mysticism — the Knights Templar, the Freemasons, the Theosophists.  Smith often claimed to be Aleister Crowley's illegitimate son.

Smith brought this sensibility to the design for the Anthology, which comes across as having been ordered by some unknowable, arcane, lost cosmological system.  His liner notes include the following quote meant to help the reader understand his decisions:

"In Elementary Music The Relation Of Earth To The Sphere of Water is 4 to 3, As There Are In The Earth Four Quarters of Frigidity to Three of Water."  -- Robert Fludd

All of this matters desperately, for reasons I'll mention in my series of posts on the first seven seconds of entry #41 of the Anthology, "The Moonshiner's Dance Part One."

For now, I'm just pointing out that someone named Zac Johnson has invented a way of using the Anthology for something resembling a Tarot reading.  Harry becomes your oracle.

You use an ordinary deck of playing cards to generate a random number from 1 to 84, which gives you an entry number for a cut on the Anthology, according to Harry's mysterious and iconic numbering system.

You then go to that corresponding song, and use it as a basis for an interpretive reading.  The extremely evocative recordings on the Anthology should serve as an endlessly rich source for readings by any reasonably sharp fortune teller who knows the collection.  The Anthology for fun and prophet.

Here's a blog entry and podcast that explain the details of the card system.

It's not exactly free for download, and so far excludes the Anthology, but eMusic carries most of the Smithsonian Folkways catalogue, including a lot of the cobbled-together LP's that Smithsonian used to offer as custom-made cassette/CD-R only -- such as the Dock Boggs interviews, or the original Friends of Old Time Music concert compilation (a single LP, not the recent boxed set). It's a pretty inexpensive way to access an embarrassment of riches. (No, I don't work for eMusic, I just love 'em. Though you *could* list me as a referrer if you sign up so I can get a bunch of free downloads...)

Hey there, nice to see somebody cares about the old bluegrass and old-time time podcast!

I hope you enjoyed the interview with Zac about the Anthology Oracle.