This is the second in a series about the first seven seconds of "Moonshiner's Dance," recorded in Saint Paul in 1927 by Frank Cloutier and the Victoria Cafe Orchestra.  It was included in the Anthology of American Folk Music, sometimes called the Harry Smith Anthology.
See also Part One and Part Three. 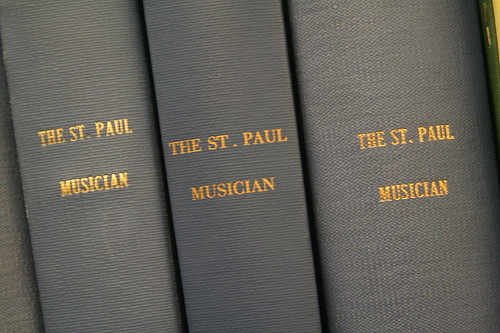 Early in my research into "The Moonshiner's Dance," I knew the identity of Mister Larson would be easy to uncover.  It's the low-hanging fruit.

After all, Frank Cloutier addresses him the instant the recording begins. Hey hey, Mr. Larson!

I knew Larson would wind up being a musician in Frank's band, or the owner of the Victoria Cafe, and I'd write up a neat biography of this Larson guy and explain why he's so prominently placed at the start of Frank's only recording.
Today, deep into my third year of research, it hasn't turned out that way.
I've seen hundreds of thousands of advertisements, newspaper articles, obituaries, theater programs, union newsletters, graves, birth and death certificates, draft cards, photos, letters, and much else.
I'm a resident of the Twin Cities of 1927.  Driving around St. Paul, I once saw a product of the WPA and caught myself thinking, "Hey, THAT'S new."

Living like this — hanging around the dance music scene of Prohibition-era Saint Paul— I keep encountering the same guys over and over.  I notice when their wives have kids.  I know when they finally get their own bands.  I hear about it when a good pitcher joins their kittenball team.
And I'm sorry.  I don't know any Larson — at least nobody associated with Frank Cloutier or the local dance scene or the management of the Victoria Cafe.
—
Maybe I'm not hearing the muffled 1927 recording correctly.  Maybe it isn't "Mister Larson" at all, but something else.  Here's an mp3 of the first few seconds.

I briefly considered whether Frank might instead be saying "Mister Nelson" as in Gordon Nelson, the drummer who seems to have played on "The Moonshiner's Dance."  For a bit longer, I considered the Cafe's manager at the time of the recording, Sammy Markus.
But listening again to the recording, I find they just won't do.  Hey hey Mr. Markus.  Hey hey Mr. Markus.  Hey hey Mr. Markus.
No.  It's "Hey hey Mr. Larson."
As a last resort, I scoured the entries for "Larson" and "Larsen" in the St. Paul and Minneapolis city directories, which they started to call "phone books" once everybody got phones.
Ordinarily, I adore city directories, intimate and teasing as they are.  But searching every Larson in the Twin Cities directories is tedious work — there are roughly 2700 entries in the 1927 editions and they have to be scanned line by line, by hand and eye.

St. Paul is striking for its lack of prospects. I found one music teacher named Bertha Larson who was presumably not a Mister.

There are more prospects in Minneapolis.  There was a piano mover named Gustaf Larson and a piano tuner named Martin Larson — unlikely professions for Mister Larson, even though Frank Cloutier was a keyboardist. There was also a movie house manager, a cashier at a dance hall, a radio salesman, and another woman music teacher.

There was a family of musical Larsons, and I've done a longitudinal study of them — followed them around town like a shamus.  So far, none of these Larsons seems to have a connection to Frank or to the Victoria Cafe or even to St. Paul.  They were not well known, and other than their name, nothing seems relevant about them.

The 1930 census counted about 11,900 individuals named Larsen or Larson in Hennepin and Ramsey counties, the counties of Minneapolis and St. Paul. Limiting myself to the right age and gender brings the number down, but I have to face the fact that I may never find the Larson that Frank had in mind.

One last prospect has occasionally troubled my mind for about two years.  In 1927, the leader of the Minneapolis Police Department's band was a cop called Curly Larson.

I've tried to find out more about him, but so far, he's been a tough nut to crack, probably because of that Curly nickname. We know he was probably bald.  I'll keep searching.

But no matter the details, it's a delicious idea.

Smack in the middle of Prohibition, the leader of the Minneapolis policeman's band puts on his uniform every Friday and Saturday night, crosses the river into St. Paul, and plays "The Moonshiner's Dance" at the Victoria Cafe with Frank Cloutier and his boys.

Playing that soused polka in uniform on the bandstand ... I desperately want him to have done this. There is exactly zero evidence that he did.

But could he have?  Could a Minneapolis cop have played such a drunken, reeling tribute to bootleg liquor without being fired, or even arrested?  Especially if he was prominently featured on a 78 rpm record?  And might a St. Paul officer have made the same trip to Minneapolis, maybe in a pickled cop exchange program?

During many long days in archives and libraries, I've often bounced these questions about Curly Larson off my findings.  Partly thanks to that habit, I've slowly evolved from being the archivist of "The Moonshiners Dance" to being its cultural historian.

The shift felt complete the day I finally decided to trust my findings about all these Larsons.  There's always so much more work to be done, but so far, nobody has presented himself as the likely Mister Larson.

Therefore, according to my current research results, there probably was no Mister Larson. Or rather, there were many thousands of him.  I've come to suspect that Mister Larson is a product of Frank Cloutier's imagination.  He's the generic audience member — just your typical Minnesotan off the street.

If so, this would make him a founding citizen of Lake Wobegon. Like Garrison Keillor's townspeople, he's a caricature invented for the sake of Minnesota humor.  To this day, Mister Larson still lives next door to Pastor Inkvist and across the street from Carl Krebsbach.

It would also make Mister Larson an ancestor of Mister Jones, Bob Dylan's main character in "Ballad of a Thin Man."

Just as with Dylan's character, the inclination is to imagine Mister Larson as somebody other than you.  But Frank and Bob both address the listener — both are talking to and about you, no matter what name they give you.  You are Mister Larson.

Something is happening, therefore, and you don't know what it is.  To understand who Mister Larson was, we have to sort out what he might have meant to somebody like Frank Cloutier in a place like Saint Paul at a time like 1927.

We have to reconstruct a meaning that no longer exists.  We have to do cultural history.

Fascinating. You are so lucky to be able to immerse yourself in your research like that.

I don't understand why you are so sure that you are hearing the name "Mr. Larson" correctly. If you know Cloutier isn't saying "These boys geeky entwine anonymous spectacle play pen! That's it, go boys!," what makes you think that the former part of the recording is true to what was really said?

Thanks, anonymous John! Obsession is nice because you get a lot done on one thing, but the downside is that the rest of your life gets short-changed. On the other hand, if you manage to really focus on one thing, you learn incredible things about the rest of the world along the way.

As for Larson, I'm not sure. If you listen to the recording, some words are very clear, others are less so, and others are completely obscure. "Hey Hey Mister" is absolutely certain, as is "Go boys!" Everything in between is totally gibberish except "Larson" which is reasonably clear but uncertain. I'd put it at about a 77% certainty.

I have been reading your web site for the last several days and have really enjoyed it. Did you happen to notice that a copy of the Gennett 78 "The Moonshiner's Dance Part I and Part II" by Frank Cloutier and the Victoria Cafe Orchestra recently sold on ebay? This record may enable you to discern additional pieces to this audio puzzle. It would also give you the opportunity to listen to Part II, if you haven't heard it yet.