The Anthology at Tom Waits Concerts 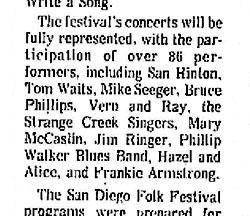 Tom Waits is on tour — a rare enough news story in itself.

But note that the music piped into the theater before and after the shows, to date, has been The Anthology of American Folk Music, edited by Harry Smith.

Better Off Without A Wife and Chubby Parker, The Carter Family, and John Lomax, and,

Down There By the Train and Uncle Dave Macon and Henry Thomas (although I really "buried the lead" on that one — scoll down).

... I have a lot more of these up my sleeve and I may get some of them written up some day ...

Anyway, it's interesting to see Waits tip his porkpie to The Anthology so explicitly.

But it would be absurd to say I've finally been "proven right."  Waits has often been pretty generous in acknowledging his debts to other musicians, and folk has always been in the mix.

Thanks to Ray for pointing out the use of The Anthology at the recent concerts, and to TCCBodhi and Dave R. at the Raindogs discussion list for providing independent confirmations.