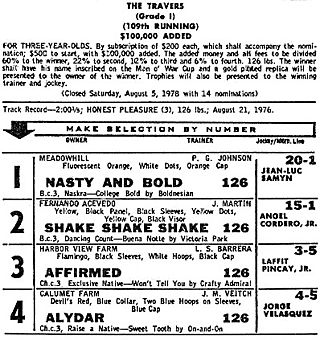 The first time I went to a racetrack — Canterbury Downs in Chaska, Minnesota around 1999 — I picked up the horse-racing program and felt a jolt.

"So THIS is where Harry Smith got the design of his liner notes to The Anthology of American Folk Music!"

Wherever he got his ideas for them, those liner notes were so weird — so peculiar and particular and captivating — that listening to The Anthology without getting to know its liner notes seems a little perverse.

From the beginning, those liner notes have massively multiplied the force of the blast that's slowly gone off in American culture thanks to Harry Smith's Anthology — a 1952 collection of old recordings from the late 1920's and early 1930's.

Well, now the Smithsonian has put those notes online for download by anybody for free.  Maybe this is just the first time I've noticed it, I'm not sure.

In any case, it's a big honking 62 MB PDF, so watch out.  Also note that they start with the new liner notes from the 1997 reissue before getting on to Harry's original notes.

The posting of this PDF seems to be part of a site redesign, eliminating the Smithsonian's old Anthology site and replacing it with a new one that looks rather like their Global Sound commerce site.

I'm keeping my fingers crossed that this change means that the individual entries of the Anthology will soon be available for purchase as mp3's.

Of course, I think it's time to stop chippying around and kidding yourself and get the box set on CD.  You'll never regret the expense, believe me.

Cool. Thanks for the information. I didn't want to just drop in and not say gracias'.
pd aka MooPig