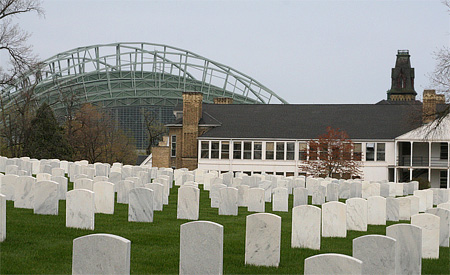 Maybe the Milwaukee Soldiers Home astounded me so because I was unprepared for it. I had no impression of the place, beyond a few lines on a map, until I found myself suddenly in the middle of it. Then I wanted to call everyone I knew and tell them to go there immediately.

My only thought originally was to visit the grave of Frank E. Cloutier's son — Alden, a sergeant during World War Two. The soldiers home, where Alden died, is surrounded by the Wood National Veterans Cemetery, where he's buried.

I realized long ago I can learn a lot by visiting the graves of the various characters I encounter in my research. Often, the headstone's inscription teaches me about the person's military service, or relatives I hadn't heard of are buried nearby. Sometimes, I discover a musician was a dedicated Freemason. Occasionally, the adjacent plot for the widow never quite got filled.

Once, explaining all this to a coworker, he said, "Just imagine how much you'd learn if you dug them up." I thought seriously about this for a few more seconds then you might imagine before coming to my senses. I think it's possible he could have been making fun of me.

Anyway, the grounds of the Milwaukee Soldier's Home are mind-boggling. Approved by Abraham Lincoln, they have the most impressive Victorian (I guess) architecture I've ever seen — overly massive and extremely dramatic. After more than forty years of visiting Milwaukee, I somehow had no idea such a place even COULD exist there, much less that it actually did, and very deep in the heart of the metro area.

And the buildings are all dilapidated. I later learned that a concerted effort is underway to preserve and renovate the place, but it is currently in a surreal state of disrepair. Peeling paint, broken boards, shattered windows, yellow police tape everywhere. Any movie studio would gladly pay a small fortune to make pristine grounds look this neglected. Sadly, paying to make neglected grounds look pristine is a harder sell.

Strange and disorienting as the visitor's experience is, it's intensified by the overwhelming, looming presence of a cynical and majestically trite metaphor — Miller's Stadium. The unimaginable scale of the stadium, just across the street, gives the impression that you could almost touch it from every point on the grounds. The rows of headstones feel like the stadium's parking lot.

It's impossible to walk there, at this stage in the renovation project and at this stage in American history, and not see the irony. A crumbling veterans hospital shadowed by a violently expensive baseball stadium.  (According to my research, Miller's Stadium was built at a cost of 87 godzillion dollars. For the mathematically disinclined, that's an 87 followed by six ass-loads of zeros.)

The casual visitor will definitely be reminded of the scandal that put Walter Reed in the headlines a while back. Of course, it should be said — emphatically — that I have no clue about the medical care and other services currently offered veterans in Milwaukee. A knowledgeable veteran, for example, recently told me the veterans hospital in Madison is truly world-class. I was surprised to hear this because I know nothing about it.

Since visiting this veterans home, I learned that my father's mother volunteered there for many years, helping care for World War Two veterans around the time of the Vietnam War. Maybe my grandmother knew Alden Cloutier.

But I wouldn't have known any of this had I not made the effort. I've visited a lot of locations across the Upper Midwest for no reason other than some musician happened to pass through there 80 years ago. The effect is a little as if a Star Trek transporter beam had gone haywire and dropped me off at a random place and time. I highly recommend it.

Here is a Flickr set I took there (it begins with rather too many shots of Alden's headstone) and here are some shots by other Flickr subscribers.

I am linking your excellent Soldiers Home blog entry to the new Soldiers Home Website (replacing existing and stale site in September). I wrote this description for the link: Site owner describes an emotional first discovery of the Soldiers Home and laments the condition of the village buildings. Thanks!

I became a volunteer for the ROH several years ago. At first I was doing it because my parents are buried at the VA (dad's a Korean Vet). But I found it to be a learning experience and have been volunteering my services every year since. I found out you can learn alot more by listening to the stories told by a veteran than you can by reading them from a book. It's a honor to pay tribute each year to the Veterans and it's also been a difficult road trying to get funds together to restore all the historical buildings.