This is the first in a series about the first seven seconds of "Moonshiner's Dance," recorded in Saint Paul in 1927 by Frank Cloutier and the Victoria Cafe Orchestra.  It was included in the Anthology of American Folk Music, sometimes called the Harry Smith Anthology.
See also Part Two and Part Three. 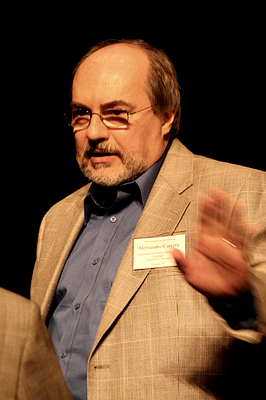 At the 2007 Bob Dylan symposium in Minneapolis, Alessandro Carrera, the leading Italian translator of Bob Dylan's lyrics and prose, told a story about his first awareness of Dylan. I keep remembering it as I think about Mister Larson.

The gist of the story was this:

When Carrera was a teenager in Italy in the late 1960's, he was obsessed with American music — even though it was very difficult to get a hold of, and he could count all the words in his English vocabulary on one hand.

Listening to albums by Joan Baez, and by the Byrds, and by Peter Paul and Mary, what excited him most on each album was always the one or two songs that had been written by this guy — one "Bobe Dee-lahn", as Carrera pronounced it.

Of course, he couldn't understand the lyrics at all — it was Bob Dylan's melodies that attracted him.

It took some doing, but Carrera finally got a hold of a recording by Bob Dylan himself — a 45 rpm single, one side of which was "Mister Tambourine Man."  He put it on the turntable, and was elated to hear that the first word out of Dylan's mouth was one of the few English words that the teenage Carrera knew.

"The Moonshiner's Dance" begins with a 7-second spoken introduction. A prologue.

In the next five seconds, in the same declarative voice, he rattles off about 20 more syllables. But because of some rasping and, maybe, needle-bouncing at start of the recording, all but a few of these syllables are completely indecipherable.

To just count the syllables in the introduction, I had to transcribe it phonetically, without worrying about its meaning.  The words sound something like this:

We may never know what Frank E. really said (and I doubt I've made a lucky guess).  Maybe the Gennett recording engineer in 1927 used a blank wax disc that was rough or soft near the outer edge. Preparing the wax was skilled labor and results could be slightly uneven. If that's the source of the noise, every released copy of the 78 is similarly indecipherable.

On the other hand, the Smithsonian-Folkways' reissue on CD is the only version I've heard.  It may be that their "source copy" of the 78 rpm record was damaged just there. Perhaps another copy of the 78 has a prologue that can be understood.

In any case, after this spoken introduction someone whoops "WAH hee!", and the band strikes up its reeling, careening medley of tunes played as one-steps.

I, and possibly you, listen to these old recordings to put our minds through an intense exercise.  It's, like, mind-expanding.

We lean into the noise and try to tease out the delicate signal as it leaks across a divide as impenetrable as a world war, a depression, and a cold war.  The Mason-Dixon line.  The color line.  Class and gender and religious and educational and technological divides.  And, for us, those divides are not so much obstacles to our listening pleasure as they are at the root of the pleasure.

Among the recordings on the Harry Smith Anthology, The Moonshiners Dance comes to me across the shortest distances.

The first seven seconds are in English, it seems.  Frank E. would have had a Rhode Island accent, but his audience at the Victoria Cafe was an Upper Midwestern one — it still is, given that nobody is listening but me.  In fact, the Victoria Cafe is still standing, just a couple minutes' drive from my house.  Frank E. was even raised Catholic, like me — and unlike almost everyone else on the Anthology (except the Cajuns, who do not speak my language).

You'd think I'd have a shot at understanding Frank E.

Instead, I'm like Alessandro Carrera.  There's a world between me and the speaker, and I can only pick out a few translatable syllables.

But I recognize something in the gesture. Hey hey, Mister Larson!

Frank could hardly have imagined our existence.  We're eavesdropping on his message to Mr. Larson, but somehow the message seems intended for us. But what does it mean?

Kurt,
A thought provoking (as usual) entry. There's nothing I like better that trying to decipher the lyrics on a worn eighty-year-old 78! Ok, it's at least in my top 20 favorite activities - right between playing old-time string band music and eating Thai food, or...

But given the condition of the copy of "The Moonshiner's Dance" used in the Anthology, it's doubtful if there can be an accurate hearing. Of course there is also the question, if we could hear exactly what is said would we know what it means? Still the first step is to know the words.

I'd rate my accuracy on interpreting this one at about 2%, but none the less here's my stab at the intro to "The Moonshiners Dance" -- "Hey, hey Mr. Lars (could be Larson), It seems like if we are fine (or fined), no one inspects the play pen. That's it - go boys!"

Unfortunately, there's no way to figure out what he's saying from the context. If I didn't know better, I'd think he was saying something about anonymous sex. Or maybe he was.

What's more interesting to me is that it sounds like an acoustic recording. According to the history of the Starr Piano Company at http://www.starrgennett.org/stories/history/3.htm, Gennett, despite their "New Electrobeam" advertising, had troubles with their equipment and didn't fully convert over to microphone recording in their studios until January 1927. It may be that for a field recording (i.e., St. Paul) later that year, they used older, more trustworthy, equipment. Or maybe the acoustics in the Victoria Cafe (was that where it was recorded?) were lousy. Whatever the case, the bandleader is not very close to the microphone or acoustic horn when he makes the initial anouncement. Hey, hey!

Minor correction: I think you meant Byrds, not Birds. The Birds with an "i" were a British group, but I doubt their limited fame extended to Italy, and I don't think they recorded any Dylan songs.