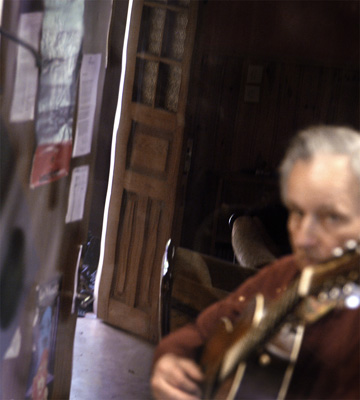 It's been just over 2 years since the breaching of the New Orleans levies. August 28 will forever make me think, strangely, of both the flooding of New Orleans and Tom Paley.

On the night of Katrina's landfall, my wife and I were in Two Rivers, Wisconsin to see our first concert by Paley, one of the three original founders of The New Lost City Ramblers. After the show, we went back to our hotel to watch CNN and drink Manhattans, nervously discussing whether the levies would hold up.

Since then, I've seen Paley twice more — once at a "house concert" around the corner from my Minneapolis apartment, once in a little conference room at a suburban Marriott.

One great thing about concerts by the old folk masters is that they're usually pretty much right there, sitting in the chair next to you. A fair sense of what those concerts were like can be gotten from his new CD, Beware Young Ladies!

It's heartening to hear him singing in that same voice I recognize from the Ramblers recordings of the late 1950's and early 1960's — a voice that has always given the impression of straining for its height and sweetness. There's a faintly humorous creak in it — there always has been — and it hints, a bit, at the silly, avuncular, generous presence you meet so vividly in person.

In concert, Paley's introductions to his songs are lengthy shaggy dog stories, starting and ending nowhere, and are fantastic to hear (possibly not three times in a short time, as I have). Any hint of them are sadly missing from Beware Young Ladies!

For example, in concert Paley points out that "Croquet Habit" apparently started out as a song about a cocaine habit, but at some point, someone allowed the subject to drift.

The songs of Beware Young Ladies! are nearly all traditional murder ballads and rounder songs about dissolute youths and the women they exploit, as the title suggests. Paley makes them seem like great old lullabies whispered into your crib.

This generates that same friction that sparked the performances of The Ramblers, the original Carter Family, and so many others. The incongruity engages me in a way that's rare in much "contemporary folk," where the subject matter rules the mood like a petty dictator.

His version of the "The Lazy Farmer" is very close to that on the Harry Smith Anthology, except slowed down and played on solo fiddle, producing a more lonesome, back-woods sound. Paley also milks the song for its laughs, which I'd forgotten it has.

The CD also includes one song I know only from The New Lost City Ramblers, "Three Men Went A-Hunting" which portrays three ethnic stereotypes — a practical and dull Englishman, an argumentative contrarian Scotsman, and an Irish dreamer lost in his own stories.

I wish Paley had included at least one of his Swedish polskas, which he plays so beautifully on fiddle and which feel so at home among the American folk songs.

Beware Young Ladies! is a sampling of Paley's work on banjo, guitar, fiddle and harmonica, and while I'm not sure he's never been sharper, he can still mop the floor with most musicians a fraction of his age currently making a living as old weird Americans.

By now, his clawhammer banjo technique shows so much experience that it doesn't bother to prove anything. His rendition of "Sporting Life Blues" will make country blues guitarists sit up and wish he'd done a whole album this way. Like Mike Seeger, when I've seen Paley blow into his harmonica, I've literally heard gasps from concert audiences — people just aren't used to that vivid old-time technique.

The CD is a close collaboration with one Bert Deivert, with whom I'm not familiar at all. I'm cool on Deivert's singing style, which I find overwrought, and Paley gives him too many chances to take the lead. But he and Paley seem to have been playing together for quite some time, judging from how beautifully they accompany one another, and Dievert's playing puts some meat on Paley's bare bones.

I should mention that I love the design of the CD's packaging, which my mp3-downloading readers will miss out on. It's cleanly modern and simple and European — ugly Americans will think of Ikea (I know I did) — but it feels rustic and hand-fashioned at the same time.

The photography is wonderful, and I thank the record company for their kind permission to use a bit of that.

It's quite amazing when you reflect on this:

The New Lost City Ramblers came together in the late 1950s. Paley left the group in 1962, to be replaced by Tracy Schwarz. All four men -- Paley, Schwarz, Mike Seeger, and John Cohen -- are still alive and still active as performers of traditional American music.

God bless 'em all. They've certainly enriched a lot of lives and opened a lot of ears.

Ben Paley plays in a group called (wonderfully) The Expatriate Game along with Maggie Boyle and my good friend Duck Baker. They have a great CD. I just thought you'd like to know.

I love this cd! Midnight on the Water - just breathtaking...