When My Willie Come Home 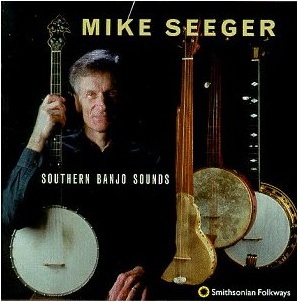 Recently, Hillary Clinton made a cutesy Lockhorns-ish joke about her husband Bill being a bad and evil man, presumably thinking of the Monica Lewinsky incident, among others. And, you know, all the pundits got busy on it.

Personally ... maybe it's me ... what I thought of was a cut on Mike Seeger's "Southern Banjo Sounds" — the one called "Last Night When My Willie Come Home." It's one of my favorite cuts on a CD full of brilliant recordings.

It's a lively performance, sweet and funny, punctuated by quills — bamboo pan pipes, basically, which Mike wears the way Bob Dylan wears his harmonicas. At the same time, Mike accompanies himself on banjo, sounding absolutely effortless, natural. But the liner notes inform us that he's alternating between SIX different styles of banjo picking based on the playing of Sam McGee, Virgil Anderson, Maybelle Carter, and Charlie Poole.

Well, it was late last night when my Willie come home
Heard a mighty rappin' at the door
Slippin and a-sliding with his new shoes on
Oh Willie, don't you ramble no more

Of course, Bill Clinton was called "Slick Willie" back in 1992, and the Willie in Seeger's song is "slipping and sliding". Maybe that's more than enough of an association.

But when Seeger refers to "my Willie" in the first line, it always carries an unfortunate penile image for me, and I have to remind myself that the speaker is Willie's long-suffering woman. Then again, the Starr Report conjured a lot of similarly unfortunate images, and the experience of trying to shake them from my head only reiterates the association, in my twisted mind, between these Willies.

More to the point, this is a rounder song — a song about a wastrel, "one who," according to my desk dictionary, "dissipates resources foolishly and self-indulgently." Willie's slippery new shoes are the central theme of all rounder songs — he lives high, spends a lot of capital on all the wrong things, and is ultimately a tragic figure. His shoes are new, but he's dangerously rootless.

Like a lot of these old songs, the point of view careens from one character to another recklessly and without warning. In the chorus, Willie speaks:

And it's "Oh me" and it's "Oh my"
What's gunna become of me?
For I'm down in town just a-fooling around
No one's gunna stand my bond.

The song is sympathetic to Willie's wife, but also to Willie — it understands his fear and regret:

Well the last time I seen my own true love
She was a-standing in the door
She threw her arms all around my neck
Saying "Honey, don't you go"

I don't have a "message" here, at least not about politics. Seeger's "Last Night When My Willie Come Home" is ill-suited to the politics you typically find today on TV and, come to think of it, in blogs. The point of view shifts (and is shared) among the characters, and the song doesn't bother much to identify the guilty and innocent. The song's affectation is light and comic, but the emotional lives of the characters are intense, sincerely felt (the inverse of what you might find on FOX chat shows).

Presidential candidates always promise to change the tenor of political debate and Hillary frames her campaign as a "conversation" — just the form in which this song comes at you. I wonder if she's looking for a campaign song ...

Editor's Note: This is the first installment of a grand experiment! The Celestial Monochord will attempt to post one entry EVERY DAY during the month of February 2007. Pray for Mojo!