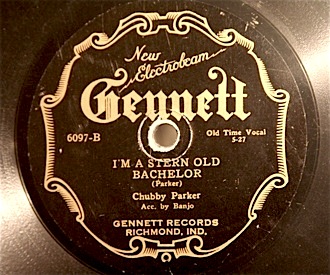 Over the past few months, I've bought nine inexpensive 78 rpm records — the first 78's in my music collection.

Most of my 78's relate to my research into Frank Cloutier and the Victoria Cafe Orchestra, although I don't yet have "The Moonshiner's Dance" (Gennett 6305) — if you own it, please contact me. One of the "extracurricular" records is by Chubby Parker, which I bought just because he's a denizen of Harry Smith's Anthology.

It's an odd buy, since the label is the same on both sides. It claims to be two helpings of the B-side, "I'm a Stern Old Bachelor," although playing the record reveals it actually has the correct A-side, "Oh Suzanna." And in fact, the "Oh Suzanna" side is considerably more worn than the "Bachelor" side, so I guess Gennett chose their A's and B's correctly. Presumably, somewhere in the world, there's a Chubby Parker 78 claiming to have two sides of "Oh Suzanna."

"I'm a Stern Old Bachelor" is a comic novelty song, which celebrates the delights of being unbound by holy wedlock. (I wish I could make an MP3 for you, but I don't have the technology.) Parker recorded it for Gennett on February 26, 1927 ... in a couple weeks from now, it will be the 80th anniversary of that recording, but I need something to write about TODAY.

It seems to have been one of Chubby's signatures on the WLS Barn Dance radio show, although "Nickety Nackety Now Now Now" was really his theme. (You may remember "Nickety Nackety" better from Alfred Hitchcock's The Birds). Both were later reissued on Slivertone, the record label of Sears Roebuck (the worlds largest store, hence the WLS call letters).

Next, "Bachelor" showed up in John Lomax's 1934 book, "American Ballads and Folk Songs." In June 1938, the original Carter Family recorded the song on their last recording session before taking off for Texas and Mexico to be on border radio with XERA. Because the Lomax and Carter texts share a couple extra verses not found on Parker's recording, I assume the Carters got the song primarily from Lomax. In any case, it's an uncharacteristically silly performance by Sara and Maybelle.

Here are the lyrics to "Stern Old Bachelor". The lines in italics are sung by the Carters, but not by Chubby Parker.

I am a stern old bachelor
My age is forty-four
I do declare, I'll never live
With women anymore

When I first heard Parker's recording — despite his high nasal voice and crisp banjo picking — I immediately thought of the Tom Waits song, "Better Off Without a Wife." You know the one:

They're more or less the same song ... well, I should say that "Better Off Without a Wife" could easily be a thorough re-imagining of "I'm a Stern Old Bachelor." I believe Waits used to do this often — take a good old folksong, boil it down to the essence of whatever makes it good, and then build an entirely new song around that same essence. See my post on "Cold Cold Ground."

Now, you may ask whether, in 1973, Tom Waits was listening to Chubby Parker or Sara and Maybelle Carter, or reading song books by John Lomax. It's a little-known fact that Waits started out at California folk clubs like the Troubadour and the Heritage. Apparently, Waits and Ramblin' Jack Elliott would occasionally hang out together in the 1970's (one suspects a nightcap or two may have been involved).

In any case, although my evidence for a direct link between the two songs is slim — and there must be dozens of other comic bachelor songs for Waits to take some cues from — there's no reason to doubt that Waits and the music of the Carters or Chubby Parker could easily have crossed paths in the early 1970's.

Editor's Note: This is the 8th day of my 28-day experiment. I'm trying to post something every day for the whole month of February. If it's something worth reading, well ... all the better.

Well, I also am rooting for you on your month-long missive-mission!

I have a 78 of Chubby Parker as well -- "Chubby Parker and His Little Old Time Banjo" -- which has "I'm a Stern Old Bachelor" on the A side and "Get Away Old Maids Get Away" on the B Side. This was put out on the Conqueror Label. Great set of tunes though unfortunately the condition of the 78 is a little rough. Playable, but rough.

I would check the dates on Lomax v. the Carter recording. Also, I think that it's more likely, just in general, for Lomax to have gotten the song from the Carters than vice versa.

If anybody living knows, it's Archie Green. I should have an email for him, but I don't. He's in San Francisco, anyway.

I ... I think you might be thinking of Alan Lomax, whereas I'm talking about his father, John Lomax. John's first book, "Cowboy Songs and Other Frontier Ballads," was published in 1910 (nineteen ten!) and was well-known all over the country. I suspect many an enthnomusicologist collected authentic folksongs from genuine hillbillies when, in reality, the hillbillies were sight-reading John Lomax books. Alan Lomax was 17 years old in 1933 (I think this is close) when he started going on field recording trips with Pop Lomax.

Right, I was thinking of "the Southern Journeys" which were Alan and John. But I still don't think John Lomax was as much of a source for these musicians at that time. They were pretty worldly and getting stuff from all over. So Lomax maybe, but maybe not so much.

A very kind reader in the Netherlands informs me that Derroll Adams recorded Stern Old Bachelor with Ramblin Jack Elliott. I think the album was "Roll On Buddy" on the Topic label.

i would love to get the lyrics of Nikety Nakety Now Now Now. My Mom use to sing it & she is gone now--but love to get the song. Is there anyway I could get them? Flo Thanks

The best place for lyrics, by far, is Mudcat. One thing I love about them is they have detailed discussions and savage arguments about lyrics, which is great because it's inherently a very murky subject, the lyrics to folk songs. After a while, the argument emerges as the more important thing.

Of course, the song appears in Alfred Hitchcock's "The Birds". If you get the DVD and watch the "special features," you'll see a songwriter tell a story about being asked to write additional verses for the song. The scene in which it's used is very long and suspenseful, but the song runs out of verses, so they brought the guy in to write more. This has made him a lot of money in royalties over the decades.