The Celestial Monochord
Home Archives FAQ
Your Wife As Krakatoa, 1883
Land of Lincoln

Battle of the Jug Bands, 2007 Results 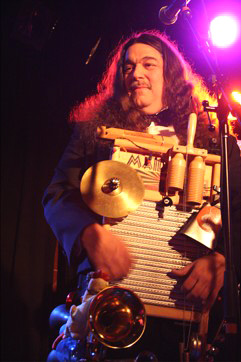 (Gizmo, a member of The Hump Night Thumpers)

The votes are tallied and authorized, and the winners of the 25th Annual Battle of the Jug Bands has been announced!

This year's winners — the jug band honored with one year's possession of the traveling trophy, a 1936 Holliwood-brand waffle iron — are The Hump Night Thumpers!

I'm proud to say that the Thumpers are from my sweet home, Chicago. The members of the band are the students of the Hump Night Thumpers class at the Old Town School of Folk Music — the band's membership rotates, with the lineup at any given moment depending on who has enrolled in the class.

The fearless leader of this band — and indeed, the leader of the large expedition that has traveled two years in a row from Chicago to Minneapolis to compete in the Battle — is one Arlo Leach, guitar instructor at the Old Town.

Unfortunately, they performed near the end of the evening, by which time I had pretty much abandoned note-taking in favor of photography. I would love to give a song-by-song analysis, but I was frankly spacing out. They certainly were a compelling jug band, I remember that.

The Thumpers were dressed in fine evening formal wear, circa 1930, bringing a bit of class to the Cabooze. In this, they joined the long tradition of elevating the reputation of marginalized musical forms through sartorial elegance and dignified personal conduct (recall Bascom Lamar Lunsford in his tux, for example).

I also remember that Arlo impressed both the judges and The Celestial Monochord by introducing their last song with this:

This next song was recorded in 1934 in Chicago, where we're from. A lot of you know the song "Jug Band Quartet" — well, this was the B-side of that record, and it's called "Little Green Slippers." [approximate quote]

See, after you've heard the evening's fifth rendition of that "Hey lordy momma momma, hey lordy poppa poppa" thing, you start to get the general idea. It was worth several extra points to hear some indication that the band knew jug band music had a life before the CD. And the LP. And the 45.

Congratulations to our jug-playing cousins to the south!

Now, I know you're wondering how last year's winners, Grandma's Saggy Jug Band, performed this year. Grandma's Saggy, as you know, was given the honor of choosing this year's judging panel. Because they — no doubt unlike THIS year's wise and talented winners! — never contacted me about serving as a member of the judging panel, I had no choice but to JUDGE THEM ANYWAY. And believe me, I was very judgy!

Grandma's Saggy Jug Band mounted the stage looking quite well-fed and self-satisfied from an entire year of eating waffles made with their trophy waffle iron. Audience members were universally honored that they had even bothered to wipe the syrup from the sides of their mouths!

Now, I suppose a few of the drunker audience members were dazzled by their fancy musicianship — "Cigarettes and Whisky and Wild Wild Women," especially, highlighted the rhythm section's slick ability to maintain a driving, danceable momentum while also filling each measure with dense, intricate polyrhythms. It was breathtaking ... to some.

And the less observant might have seen their finale — the band's signature piece, "Cock-A-Doodle, I'm Off My Noodle," originally by Harry Reser's Six Jumping Jacks — as decisive proof that the band deeply understands and appreciates the "madcap" tradition in American dance music. Personal charisma and precise musical timing were the hallmark of great novelty bands like Spike Jones and his City Slickers and Frank Cloutier and the Victoria Cafe Orchestra. In the unlikeliest of venues, Grandma's Saggy Jug Band resurrects this tradition with intelligence, respect, skill, and genuinely funny showmanship. Or so some might think.

But I saw through that. Their rendition of "Don't Get Trouble in Your Mind" was an extremely close recreation of the New Lost City Rambler's version — to the extent it deviated from the Ramblers' recording, it was more danceable, more compelling, more fun. What a garish display — the Rambler's version was plenty danceable, compelling, and fun to begin with, I assure you.

Most damning of all, their ... over-determined ethnomimesis ... failed to resolve the very contradictions inherent in the semiotics of the, uh, signs they were ... signifying. Their very Bernoulli Effect elutriated their own mycotoxicosis!

One year can make a world of difference, of course, so we'll see how this year's winners fair next year. We'll see if the fledgling Old Town School of Folk Music can withstand the treatment The Hump Night Thumpers might — or might not — receive from the Minneapolis blogging community.

Editor's Note: This is installment 12 of our attempt to post something or other every day during the entire month of February. That's about 28 times the posting rate usually maintained around these parts.

I was hoping for some music clips, but you have certainly filled the gaps so my own imagination could supply the tune.

Oh, don't worry, Miss Pattie. I will be writing more about the 2007 Battle soon. I'm not sure what or when, but given that there are 16 more days left in February ... why not???