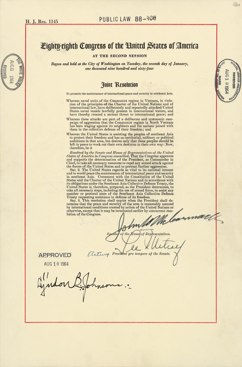 (The Gulf of Tonkin Resolution)

(This is part of an occasional series on John Prine's second album,
Diamonds in the Rough:   Everybody  The Torch Singer  Souvenirs
The Late John Garfield Blues  Sour Grapes  Billy The Bum  The Frying Pan
Yes I Guess They Oughta Name a Drink After You  Take the Star Out of the Window  The Great Compromise  Clocks and Spoons  Rocky Mountain Time

The Great Compromise seems designed to be the climax of Diamonds in the Rough, to demand our fullest attention. It's the album's longest cut (4:57) and brings the album to a kind of halt with its slow, firm waltz-time and its deliberate gravity. Besides Sour Grapes, it's Prine's only solo performance on Diamonds — just Prine and his guitar, as if he intends to take full and sole responsibility for the song.

The Great Compromise is built around a conceit — an elaborate and startling analogy. The singer's love for an unfaithful girlfriend is like his patriotism during the Vietnam War:

Chorus:
I used to sleep at the foot of Old Glory
And awaken at dawn's early light
But much to my surprise, when I opened my eyes
I was the victim of the Great Compromise

My literal-mindedness long kept me from really giving myself over to the song. The metaphor seemed stretched beyond its limits. Yes, America certainly lives in an aluminum trailer, and yes, it's got a juke-joint economy. I'd give you that. But even today, to my ears, the conceit struggles during story's action — the events causing the singer's disillusionment:

She said Johnny, won't you get me some popcorn
And she knew I had to walk pretty far
And as soon as I passed through the moonlight
She hopped into a foreign sports car

I mean, if we accept this metaphor, what does the popcorn represent? The various demands that distract Americans from the infidelities of their government? It's a true enough idea, I guess, but is it really in the song? And whose foreign sports car did America jump into during Vietnam, exactly?

Look, the Great Compromise of 1787 established both the U.S. Senate and the House of Representatives, instead of just one or the other — hence, the compromise. But how is Prine a victim of it? Maybe through the joint congressional Gulf of Tonkin Resolution, which more or less initiated the Vietnam War? Is that what Prine was hinting at? Maybe Prine's girlfriend had a constitution that was hard to negotiate?

It turns out my resistance to the song is really part of a larger issue — how meaning works, or should work, in popular song. Prine, as I've said before, learned from Bob Dylan to share the job of meaning with his audience. Leave the meanings open-ended, Bob teaches us, so the listener can participate in the making of sense.

But many of Dylan's — and probably Prine's — listeners think they're hearing an encoded message, a hidden song that could be exposed if only you knew the code. The listener participates, but only in trying to figure out what everything "really" represents.

I think The Great Compromise's writing hasn't yet settled on one or the other. It's caught in a twilight hour between these two approaches to meaning — it's somewhere between Don McLean's American Pie and Dylan's Idiot Wind.

But much like Souvenirs and Billy The Bum, I've warmed up to this song over the decades, and particularly during the Bush years. Like Take the Star Out of the Window, The Great Compromise introduces us to a good, patriotic American forced to live in his head, estranged from himself. It's about that agony:

Well she writes all the fellas love letters
Saying, Greetings, come and see me real soon
And they go and line up in the bar room
Spend the night in that sick woman's room

Since the song was written, we've seen so many "celebrities" publicly "pick sides" on so many issues. It's easy enough, if you're so inclined, to shrug them off — to dismiss the patriotism of former Canadian Neil Young, or the seriousness of pretty superstars The Dixie Chicks. But Prine seems like a different animal entirely. He consistently reminds us that disillusionment is a more potent political force than mere disagreement with others.

No matter what I said earlier about meaning, the real job of the listener, here, is to contend with what it must have meant to Prine to write this song — to compare love of country with spending "the night in that sick woman's room" — to write that down on paper. Prine is a US Army veteran — he was stationed in Germany in the early days of the war. After his military service, he spent five years employed by the Federal government as a postal carrier. His grandfather was a country musician and played with Merle Travis. According to Prine (see the bottom of this page):

So I wrote about something he knew about and I put his name in — "Daddy, won't you take me back to Muhlenberg County." And it got his ear, you know, he was ready to listen to me, just like he listened to Roy Acuff and Hank Williams. You know, this was his, his son Johnny who was singing him songs. And he knew where I was coming from in the songs.

My father died before my first album came out, but I brought a tape of it home, a reel-to-reel, and borrowed somebody's tape recorder and played him the record. It's a good thing I did, cuz he wouldn't have heard it otherwise. And when "Paradise" came on, he went and sat in another room, in the dark. That was the last cut on the record, and when it was done, he came back into the room and I asked him how come he left the room when I was playing this song. He said he wanted to pretend it was on a jukebox.

I always thought myself so cool when I listened to John Prine records - and most of my hairbrained friends would ask "John who?"

He is not everyman's cup of tea, that's for sure...

The first time I heard john prine was way back in 1972 and I will never forget it. The song was "illegal smile" and remember think that this kid might have a future ahead of him. He has turned out, in my opinion, to be one of America's greatest poets of the 20th century. His words speak from the heart and hit home every time.

To me he is EVERYMAN who speaks for all of us.

To me the theme is a government that pretends to represent its people but instead represents the monied interests, particularly the MIC. It thus bugs me that the car is "foreign"; seems it should be a Lincoln. It could stand for imperialism, but that seems to mess with the whole slutitution theme. Unless you're a bilderburger or something.

I think that maybe when he says "I", he means more than John Prine. He means many Americans with the same dissallusionment as himself, just like the girl represents more than just one girl.
The foreign sports car confuses me also, however, I can kind of see how this could be Americas growing globalism-and wealth, while many people in the South were living in poverty.
The North vs. South theme is present other JP songs like "Grandpa Was a Carpenter"

Saw, and talked with, John at the old Riverboat in Yorkville Toronto, early 70s, Diamonds had just dropped. Stayed for both shows (he let us); played most of the new LP. Blew my mind. In his mind, I think he thought he was still a mailman. He stopped talking with two mafioso-looking guys upstairs and couldn't believe we drove up from Buffalo to see him (90 miles). He was so concerned that we didn't have a place to stay that frigid night (we were young and hadn't thought of that), almost offered his room for us to flop but glanced at his handlers or buyers or whatever... He asked me if I wrote songs and I lied and said No, because I had just heard Diamonds for the first time and knew at that moment I probably would never be a songwriter. Thanks for this, Will James

I appreciate the review. I love The Great Compromise and it it is one of the most beautiful sad songs I know.
John is definitely personifying America, the Beautiful. I think he felt betrayed by his country. America the beautiful whore. 😓😓
The song was revelant in the 1970s but seems even more poignant now.