While taking a walk two weekends ago, a strange scar on the sidewalk caught my eye at Colfax and 24th in Minneapolis.

The scar was something like 3 meters long and in about 5 segments, each about 2 cm deep and up to about 5 cm wide. It was as if a steamshovel had been carelessly dragged along the sidewalk. But the scar was strangely branched. It was hard to imagine what kind of tool could have carved it, even intentionally.

On closer examination, I found the edges of the scar almost completely encrusted with black glass, some of which was easy to pick loose. (The photos below were taken the following weekend, when the scar was filled with organic rubbish.) 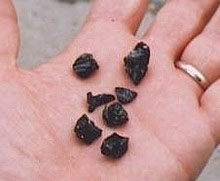 It took me ten minutes of standing around staring at the sidewalk — sometimes peering at it very closely on my hands and knees (much to the puzzlement of passersby) — to convince myself that this was created by lightning. It's fulgurite. Whatever made it not only dug a small trench in a municipal sidewalk, it also burned the sand in the sidewalk's concrete into glass.

The scar is immediately below an ordinary city powerline pole, and I can't completely discount the possibility that the scar was created by a downed powerline. I did poorly in the electricity sections of my college physics classes, but my sense is that there's a number of problems with a powerline origin for the scar — not the least of which is that powerlines just don't have the juice to do the job. More likely, the pole attracted the lightning.

Fulgurite is usually found on sand beaches, and online photos of it make it look a little like coral. I think the loose quality of sand eases lightning's path and allows for the dramatically-shaped objects usually associated with fulgurite. Sidewalk fulgurite is not unheard of, as this PDF reprint of a 1947 article in Rocks and Minerals attests.

Wow - I would have never put two and two together, and only assumed the sidewalk was made of lousy concrete....

Again, simply to reiterate: wow! A beautiful exmaple of real world EDM (Electrical Discharge Machining) and the odd forms left in its wake (in this case the black glassy concretions).

What you have there was indeed caused by a downed power line. I have seen this happen personally on two occasions; once during a storm in 1994, and again in 2000. The marks left behind in each case were exactly like the ones in your picture.

I have seen this before in San Francisco on a sidewalk. It had the same branching structures and there was a black glass like finish to it. The street was about 5 blocks away from the ocean. It wasn't made of particulate minerals like the one in your photo. It was solid, so there was no way to pick anything out. At the time, I thought maybe it was done by some sort of acid, but this makes more sense.