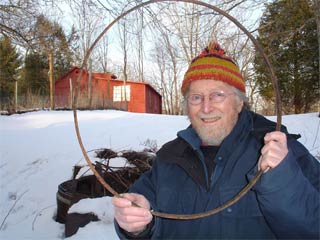 Last night, John Cohen was at the opening of a new exhibition of his photographs in Minneapolis (at the Icebox until November 4). The lines to have Cohen sign his books for you were short and occasionally non-existant, so you could sit down with him for a minute or two and chat before somebody started hovering nearby.

When I sat down at his little table in the corner, the Icebox's Howard Christopherson was making sure Cohen had a fresh round of hor d'oeuvres. Cohen seemed in good spirits — although I fired questions at him like a drunken Jack Webb, he was very patient and performed, like an actor, the emotional content of his answers.

Below is a pretty close transcript of what we said, furiously scribbled down immediately after the conversation. My apologies for any serious misquotes, and note that I did not identify myself as a blogger. Some clarifications follow the "interview."

The Celestial Monochord: I think the photos I'm noticing most are the ones I've never seen before — the one with Dylan and the chicken, and especially the one with [ Rambling Jack ] Elliott and ... and ...

John Cohen: And Woody [ Guthrie ]. Can you believe I missed that? I didn't see it until this show, and I'm so glad that I ...

Cohen: Yes, it is a very emotional picture. I just didn't know it existed until I got ready for this show. It's way over-exposed so I must have passed over it on the contact sheets until now.

Monochord: Oh, I see. I figured it was too personal so you didn't use it until now.

Cohen: Well, there was a lot of emotion then about Woody and what was happening with him, but on the other hand, I did use that one on the cover of "There is No Eye". [ he points at the book nearby on the table ]

Monochord: Yeah, that's true. Hey, who are these two guys here and here. [ pointing at the two musicians playing for Woody Guthrie on the cover of the book ]

Cohen: They're from The Tarriers — it's Bob Carey and Erik Darling [ more pointing — and I'm not 100% sure I remember this info correctly. ]

Monochord: Ok, I have a question, and I wouldn't ask you this question if I wasn't somewhat eppifficated. In the DVD that came with Dark Holler — the Dillard Chandler documentary — was that a drag queen? Was that a guy in a dress? What was that about?

Cohen: That was the same guy who was in the cafe before — Dillard's friend. Same guy. They knew I'd be filming at this party and they were putting one over on me. When I saw them coming through the door and he was wearing women's clothes, I thought, MY GOD, what joke are they pulling on me? So I just thought, well ...

Monochord: But he seems to be really into the clothes — he's so meticulous, he keeps adjusting himself, he's very into how he looks and making sure he's ... [ here, I'm pantomiming the guy in the film ]

Cohen: Yes, well, his wife is right there and his kids are there ...

Monochord: Ok, I'll leave you alone here, I'm taking up your time. I want to thank you for coming to Minneapolis and for everything you do. There are certain heroes of mine that I never got the chance to thank for what they did for me in my life, and I'm just glad I got to ... like Carl Sagan ... Oh I know — hey, just one more question! What was it like when you got that phone call saying, "Mr. Cohen, we want to send your recording of a Peruvian wedding song on a rocket ship into outer space." What did you think?

Cohen: [ before answering, he squeezes his eyes closed, turns his head to one side, and presses the tip of his index finger to his right temple for a good four seconds ] No, it wasn't like that. I found out about it in the New York Times.

Monochord: What, afterwards? When it was a done deal?

Cohen: Yes, I only read it ... I found out about it reading the New York Times.

Monochord: Ok, thank you. Please sign my book. My name is Kay You Are Tee — Kurt.

Monochord: Thank you again. Nice to meet you.

Editor's Notes: As of this writing, the Icebox has posted the three photos we discussed — the one with Dylan and the chicken and the one with Jack Elliott and Woody Guthrie, who was suffering from Huntington's Disease (thanks Bill B.!). Here's the one with Woody and who I think are the Tarriers.

You get a free DVD of the documentary about Dillard Chandler, "The End of an Old Song" — with a cameo by a guy in drag — when you buy the Dark Holler CD.

For more on Cohen and Carl Sagan's Voyager record ("a Peruvian wedding song on a rocket ship"), see my previous post at the Celestial Monochord. Among the best moments in the book about the Voyager Record are those in which the team assembling the photos and music for the record seek permission from puzzled copyright holders.

I had him sign "Young Bob: John Cohen's Early Photographs of Bob Dylan" but unfortunately forgot to bring my copy of There is No Eye.

How cool is it to meet Cohen and have a real conversation instead of the usual cattle call of most book signings?

Thanks for the links and the script of your "interview"!