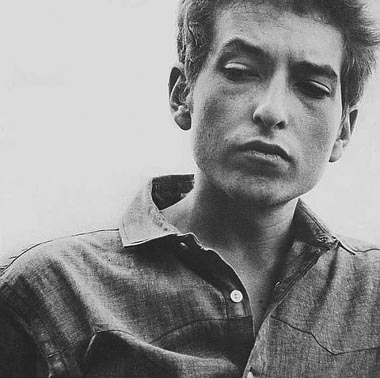 When Bob Dylan was 13 years old, one of the century's worst epidemics of black stem rust struck the upper midwest — particularly North and South Dakota and Minnesota. Up to 75% of the wheat harvest was lost to the disease, which blackens the crop with a powdery, sooty fungus. The economic consequences were severe, and the incident became legendary within the science of plant pathology. There's no way young Bob Zimmerman of Hibbing, Minnesota wouldn't have heard about it.

But there were plenty of other diseases to blacken your crops, or kill your animals or you. I'm not an expert in any of them. Ergot can blacken wheat, barley, and other cereals and causes "bad blood" in cattle and humans — convulsions, gangrene, derangement. An invisible fungus in a common grass leads to tall fescue toxicosis, with grotesque symptoms like "fescue foot" and nasty birthing problems. Maybe Bob had heard of such diseases as well.

Dylan's "Ballad of Hollis Brown" is an exercise in empathy — its power is in the vividness of its vantage point within the head of a desperately bad-luck South Dakota farmer, and in the way the song dares you to turn away. Having lived in Minnesota for almost 20 years, or about as long as Dylan did before he moved to New York, and I can almost see how the young songwriter might have found the empathy to write such a convincing song.

Even in fairly cosmopolitan Minneapolis and St. Paul, farming is always a presence — to this day, grain mills and breweries (or their ruins) are lined up along the Mississippi River. They're a constant reminder that the cold climate used to limit the viable crops to stuff you could grind or brew, plus animal feed — wheat, barley, oats, alfalfa, sorghum, various kinds of hay. When you fill your gas tank in Minnesota, you have a good chance of being reminded that farmers have more options today, such as President Bush's switchgrass. Fully 200 of the nation's 600 ethanol ("E-85") gas pumps are in Minnesota.

A few years ago, a friend of mine moved from the University of Minnesota to New York — just like Dylan, you might say, only forty years later. On her first day in Manhattan, a shopkeeper mentioned the lack of rain, and my friend, forgetting herself, asked if the farmers upstate were suffering. The shopkeeper gave her a look as if she'd just evidenced a severe case of Tourette's Syndrome.

But that awareness and empathy, which so animated Dylan's "Hollis Brown" in 1964, has its limits. In fact, "Hollis Brown" is primarily about those limits. For that reason, it's convenient for Minnesotans that the song is set next door, in South Dakota.

South Dakota's leaders have worked to make the state's economy, and perhaps its conscience, better insulated from the booms and busts of farm life. In 1980, South Dakota was in desperate financial straits and took action by eliminating all laws against usury. Citibank, among other credit card companies, moved operations to the state almost immediately, leading to an explosion of growth in Sioux Falls and, some say, to a lot of South Dakota farmers declaring bankruptcy.

I happened to hear "Hollis Brown" on the same day the South Dakota governor (born the very year of the black stem rust epidemic) signed the bill designed to ban almost all abortions in the state, and ultimately, to overturn Roe v. Wade nationwide. That's what got me thinking about the song again. It seemed like yet another example of Dylan's uncanny foresight that he set the song in South Dakota even though, in 1964, Mississippi played the role in folksong that South Dakota now seems eager to play.

Dylan got the melody of Hollis Brown from "Pretty Polly," as Greil Marcus has pointed out. "Pretty Polly" is about a young man named Willie who murders his girlfriend for reasons which the song leaves completely unaddressed and which therefore seem to take on a menacing profundity. But as Rennie Sparks points out, at least one of Pretty Polly's 16th-century sources explains the motive simply and without ambiguity: She was pregnant and Willie doesn't want the birth to take place. At least partly, this is the origin of "Hollis Brown" — a story about the murder of a woman as a de facto abortion.

The best-known version of "Pretty Polly" (the version Rennie Sparks calls "cold as a cockroach") was recorded by Dock Boggs in 1927. In 1963, Boggs was rediscovered by Mike Seeger who then recorded and traveled extensively with him. In 1993, Bob Dylan made a studio recording of "Hollis Brown" accompanied by Mike Seeger playing banjo in Dock Boggs' very singular style. Really, the banjo part on the recording is basically just a sped-up version of Boggs' "Pretty Polly." The effect of the recording is to return "Hollis Brown" to its family tree, to explicitly situate it within its lineage.

In writing "Hollis Brown," then, Dylan surely wasn't looking ahead to 2006. He was looking back to the old Appalachian murder ballads, which the song so convincingly resembles. Marcus seems to claim the song was also inspired by a newspaper report of a mass murder in South Dakota, but I haven't been able to track that down (Charles Starkweather?). Perhaps the more inspiring history took place at Wounded Knee, South Dakota's most notorious mass murder and part of the Indian Wars in which Minnesota also played an unfortunate role. Given the history of this South Dakota farm — where the buffalo no longer roam — I wonder if Hollis Brown and his family aren't merely the most recent seven people to have died there.

It makes little sense to try to enlist "Hollis Brown" in a contemporary political fight. Or anyway, that's simply not The Celestial Monochord's schtick. Besides, the song is striking as an early hint of the full-blown poetic strategies Dylan was about to unleash — strategies that revolve around undecided meaning, meaning as an unfinished art for the listener to complete, meaning not as autocratic rule but as democratic process. To claim that "Hollis Brown" is somehow against South Dakota's new abortion law is to pretty much miss the song entirely.

Still, it's in the character of Dylan's art to keep coming around, over and over, asserting itself in new contexts. I think this uncanny relevence comes from reaching as deep into empathy as he can, and from his willingness to share with us the work of meaning. Or, maybe the more you're able to encounter the world with the past very much alive in you, the more you're able to anticipate the future. Maybe this is why Dylan continues to mystify, particularly in America where memory is notoriously short and empathy often runs thin.

Editor's Notes: The following is transcribed from the 1993 recording with Mike Seeger. Also, the coyote is the official state animal of South Dakota.

THE BALLAD OF HOLLIS BROWN

Well, elements of "Pretty Polly" are certainly evident in "Hollis Brown," but "Poor Man," recorded on a 1961 Arhoolie album, Bayou Bluegrass, by the Louisiana Honeydrippers, is a much closer fit. In fact, "Hollis Brown" is in many ways a rewrite of that ballad, credited to Dave Rankin.

An expanded version of that record was issued in CD in 2002, as Jim Smoak and the Louisiana Honeydrippers.

hey -- just wondering what your sources were for the above information, i'd love to check it out!

Editor's Note: Thanks, Jerry, for the leads. Really interesting.

As for what my sources are ... I'd have to know which specific piece of information you're referring to (so write back). Many of the "big chunks" -- like the black stem rust, or the Pretty Polly stuff -- already have links showing where the information came from and/or can be found.

Probably, the best answer to your question is that The Celestial Monochord is itself the source for the above information. I'm not the kind of blogger that just raids other people's work. I try my best (usually, and for what its worth) to think deeply, research rigorously, and write well -- and I try to get as close to doing "primary research" as my time and station permit.

From March 1963, here's a performance of 'Hollis Brown' with banjo accompaniment, on the tv show 'Folksongs and More Folksongs'. Just who is playing banjo on this is a point of discussion, as The Brothers Four also played on this show it's been assumed the player is Mike Kirkland. Fantastic performance from then 21 year-old Dylan of this chilling song.

I haven't heard the Louisiana Honeydrippers, but Dylan has acknowledged this song's debt to "Pretty Polly" I think. The banjo on some live versions of 'High Water' has a similar eerie quality, played by the much-missed Larry Campbell, of course.

The links from Boggs-Seeger-Dylan are interesting. Of course, Dylan's praise of Mike Seeger in 'Chronicles' has been much remarked. Here's what Seeger had to say about Dylan in the liner notes to the 1994 CD which contained that version of 'Hollis Brown':

So much has been written about Bob Dylan, I hesitate to write more. I admire his ability to write a narrative ballad like this; it shows his great respect for traditional music and his great gifts in creating images in a most unique style. His singing style compliments the intensity of both lyrics and melody.

In the sixties, we who were involved deeply in this kind of music visited one another a lot more than these days, it seems. It was a smaller world perhaps. In August 1962 Bob was in the audience at Gerde's Folk City (a folk-oriented night club) in New York City where I was playing for a couple of weeks. I asked him to join me at the end of my set. He sang this song while I backed him on banjo.

Thanks for all the interesting articles, just catching up with them, please keep them coming!

Fantastic performance from then 21 year-old Dylan of this chilling song.

I just had the fortune to hear this song for the first time a few days ago and it's stuck in my head ever since. I've never been a massive Dylan fan but this is a staggeringly great song. The unrelenting trance-like purity of the guitar line combined with the darkness of the lyric is hypnotic. Genius.

Hanging with friends, playing along and singing with the songs on my Ipod, and this comes on. The 4 of us sat stone silent until the end. No playing, no singing. To say it was unsettling is an understatement. Wow.