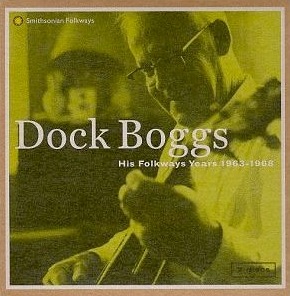 The first version of Careless Love I knew was the one Dock Boggs did, recorded by Mike Seeger thirty-eight years ago today, just in time for Valentine's Day 1968.

This was near the end of Dock's life, and so near the end of his second music career — his "Revival" career. As I've discussed at length before, Mike Seeger writes that Dock loved this second career but also found it unsettling in some ways. It apparently brought back memories of his misspent youth and its moonshine-fueled violence. Everything Boggs played in this second career could be heard as confronting this past, and as exorcising his decades working the infernal coal mines.

Careless Love is a fine example. To match Dock's high, raspy, pinched voice, you'd have to sing and sob at the same time. Though the tempo is so fast — and accelerating — that Dock can barely get some of the lines sung clearly, he delivers every word as if speaking spontaneously. Like all great singers, his song feels immediate and new:

But it's not one of Dock's graveyard songs — it's a party blues tune in good old open-G banjo tuning. In Boggs, I see the cliche of the theater's masks of tragedy and comedy taking on a new life — his music projects so many intense facial expressions.

Into this mix, add the fact that Dock apparently learned this song — and many others — from recordings of female blues singers of the 1920's. Oddly and movingly, Dock retains the original gender of the narrator:

Given Careless Love's subject — people gathering around when you're doing well, dumping you when you're down — there's no wonder the song has drawn the attention of a lot of professional musicians, from Elvis and Janis Joplin to Pete Seeger and Dave Van Ronk. Since discovering the song through Boggs in 1999, at least two other versions have crept into my CD collection. Both are unbelievable in entirely separate ways — like Boggs' version, they make me want to sit you down and say "Listen to THIS!"

One is on the first bluegrass LP every released, also recorded by Mike Seeger. It's by Snuffy Jenkins, who inspired several generations of three-finger banjo players, including Earl Scruggs. His version is outlandishly cheerful and skilled, a virtuoso piece that Seeger describes as "much influenced by jazz, as if he were playing a trumpet or jazz guitar." Follow the links above to get the Smithsonian CDs that the Jenkins and Boggs versions come from (I highly recommend them) or get the individual tracks from Smithsonian Global Sound.

The other version in my CD collection is a duet between Johnny Cash and Bob Dylan, who probably know a thing or two about careless love. The track is available only as a bootleg. In this version, Cash and Dylan are mostly screwing around. Dylan seems initially lost until Cash comes to the rescue by feeding Dylan a verse he can sink his teeth into as a tool for improvisation — a reason for the recording to exist:

Dylan: Hmmm. Give me a verse.

And so on. Louis Black describes the recording fairly well:

They do an overly long version of "Careless Love" ... One of the lines refers to a gun that Cash identifies first as a .44 caliber, then Dylan labels it a .38, and then a .45. By the end of the song, Cash has identified it as a .30-ought-6 (a rifle rather than a pistol). At one point, however, in order to hit a rhyme, Cash calls it a .41 (which doesn't exist). He's so pleased with this that, just a bit later, he again refers to a .41, and you can hear the absolute delight at this silliness in his voice. Especially noticeable throughout the recordings is just how sweet and lovely Dylan's singing and harmonies with Cash are.

Of course there's a .41. The Colt .41 pistol appears in many old blues songs, as well as in the collections of old time arms collectors. The Remington derringer was also chambered in .41 caliber and was carried regularly by Chester Burnett. Several versions of 'Delia' have her shot with a Colt '41.

Very interesting. Thanks Dan! Of course, I was just quoting Mr. Black of the Austin Chronicle ... so, that's my excuse. I assume you mean the Chester Burnett who's also known as Howlin' Wolf, and not the University of Arizona linebacker?

I think in the Cash/Dylan long version of Careless love, Johnny is referring to his Martin D45 guitar with a D41 neck that he customised and was jokingly improvising the lyrics of the song.