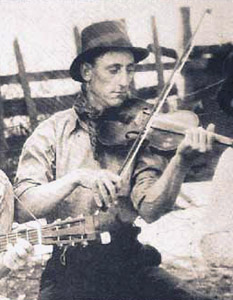 Today is the sixty-eighth anniversary of the recording of Adieu False Heart, by Fiddlin' Arthur Smith and the Delmore Brothers on January 26, 1938 in Charleston. Readers of The Celestial Monochord will recognize Adieu False Heart, of course, as one of the few pre-War hillbilly recordings about astronomy and cosmology.

It's a "heart song" — a very sentimental parlor song. You might dismiss it entirely, until you actually bid adieu to an actual false-hearted lover, at which point you think, "Now, how did that old song go again?"

Here are the lyrics, near as I can tell:

Adieu false heart, since we must part
May the joys of the world go with you
I've loved you long with a faithful heart
but I never anymore can a-b'lieve you

I've seen the time I'd-a married you
And been your constant lover
But now I gladly give you up
For one whose heart's more truer.

I've always thought the last line of the third verse should be "It's every night it changes." After all, the moon's phases change from night to night — from month to month, they're pretty much the same.

But that third verse is great. For one thing, its astronomical imagery sets up the final verse's mention of a fairly technical idea in cosmology — the speed of time. Coming after the previous verse, it gives a touching sense of the singer caught up in nature's relentless, remorseless clockwork — he's as much a victim of Isaac Newton's conception of time as of a lousy girlfriend.

That theme is emphasized by the recording's pace, which is set by a firm, metronome-like guitar. As Arthur Smith sings the very last line ("Just as fast as time can take me"), the clockwork rhythm ... gradually ... slows ... to a ... halt.

I've mentioned before, in the context of Tom Waits and Stephen Foster, that people who are grieving often become morbidly fixated on nature's small details. Think also of Walt Whitman's When Lilacs Last In the Dooryard Bloom'd. In a sense, Adieu False Heart gives us yet another person in deep emotional pain who becomes acutely aware of the natural world — and in this case, the "nature" that the mourner struggles to come to grips with is the very character of space-time itself.

By the way, both Fiddlin' Arthur Smith and the Delmore Brothers were members of the Grand Ol' Opry around the time of this recording. Smith's fiddling (along with that of Clayton McMichen and Curly Fox) was hugely influential to Bill Monroe as he was inventing bluegrass. You can maybe hear a hint of this in the solid, driving 4/4 time of the Delmore Brother's guitars and in the novel, extended use of the "five chord." About Adieu False Heart, John Fahey writes:

Most songs go to the four chord and then the five chord and quickly back to home base. This construction is quite rare and makes for an unusually beautiful ballad.

You can find the song on the "lost" fourth volume of Harry Smith's "Anthology of American Folk Music," released on Revenant in 2000 for the first time. Chords and sheet music are available from Dylan Chords.

nice synopsis... i originally heard this song on an older compilation and it has stuck with my memory since. i think if you value efficiency of language, looking at old tunes like this one, songwriting doesn't get any better.

This song captures all the feeling of being broken hearted after a very bad relationship. This song was written in 1938 and it's lyrics are still 100% relevant to todays sufferings. The song says it all.

I love this song, The lyrics the tempo everything about it is class.The lyrics are completely relevant to today as much as to when it was first wrote. I recently broke up with a girl I was so in love with. I recon I have listened to this song over 1000 times at least. I just love it